Teeling, over the years, has released a good number of older whiskeys it draws from its sourced stocks. A lot of them end up being cask finished in one regard or another, typically with good tasting results. Now another offering from has come to market in the form of an 18 year old Irish whiskey finished in ex-Australian Shiraz wine casks.

The new Teeling Renaissance 18-Year-Old Single Malt, according to those behind it, was initially aged in ex-bourbon barrels before being finished in ex-Australian Shiraz wine casks and bottled at 46% ABV. It is said by the brand this finishing imparts “distinct hints of ripe red fruits with sour cherry notes and a delicate soft spice.” 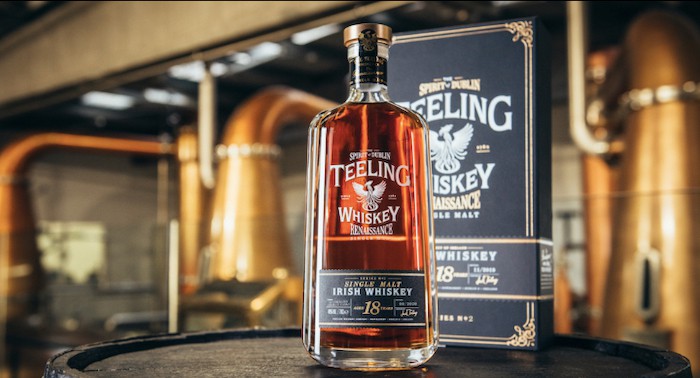 This expression is part of Teeling’s Renaissance series, crafted to celebrate the brand’s success on a local and global level.

“We are delighted to launch the second release of our award-winning Renaissance Series of aged Single Malts,” said Jack Teeling, Founder and Managing Director of Teeling Whiskey, in a prepared statement. “These releases are a celebratory bottling series to mark the true Renaissance of Dublin as the epicentre for world-class city based whiskey distillation.”

Limited to just 9,000 bottles, this bottling is set to price at €140, or about $165 USD, for a decanter bottle in gift box. Teeling Renaissance 18-Year-Old Single Malt is available in Ireland and is also being rolled out to a number of international markets, including Belgium, UK, Holland, France, Denmark, Italy and select parts of Asia.

40
Shares
3.4k
Views
Share on FacebookShare on TwitterGet Our Newsletter
Read More Whiskey News
Bushmills Releases 30 Year Old New American Oak Cask Finished Irish Single Malt
Cheers to the Dads! Personalize a bottle of his favorite whiskey to create a modern gift for the modern man. Use code: FATHERSDAY20 for $20 off your next order of $100 or more at ReserveBar