Ireland’s Teeling Whiskey recently followed the release of their 24-Year-Old and 28-Year-Old single malts with the oldest release in the series – a Teeling 30-Year-Old Single Malt Whiskey.

This series of aged Teeling Whiskey Single Malt releases, in total, have brought in more awards than any other Teeling products.

The 24-Year-Old release was honored as the best of its kind in 2019 as the “World’s Best Single Malt” at the World Whiskies Awards and followed up this honor as “World’s Best Irish Single Malt” in the 2021 WWA for the 28-Year-Old, which was earlier named “Irish Whiskey of the Year” at the 2020 International Wines & Spirits Awards. 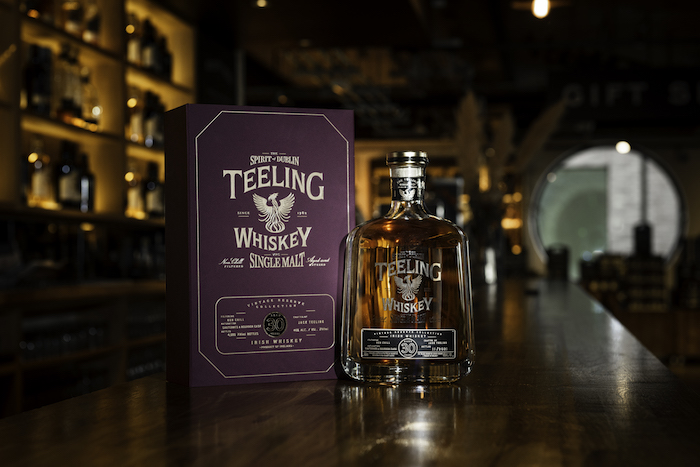 Teeling distillers, it is said, found the unique dual maturation imparts a depth of fruit flavors that balances the hint of smoke that comes from both using peated malt in its production and the oak influence from more than 30 years of aging.

The limited-edition 30-year Teeling whiskey sees only 4,000 bottles globally, and is hand bottled in decanter-like vessels complete with its own certificate of authenticity. It’s bottled at 46% ABV with no chill filtration.

Jack Teeling, founder of the Teeling Whiskey Company, said in a prepared statement, “We are extremely proud to be able to release some of the oldest ever bottlings of Irish Single Malt with our Vintage Reserve Collection.  Each release has proven that Irish Whiskey can match and beat any whiskey from around the world. Our latest Teeling 30-Year-Old Single Malt is a perfect representation of everything good about Irish Whiskey – from its robust nose to its fully rounded and balanced array of flavours. We are very proud of this whiskey and we hope it can continue to help forge our reputation as a truly World Class whiskey producer.”

Available globally including at the Teeling Whiskey distillery in Dublin, the Teeling 30-Year-Old Single Malt will be available for purchase for $2,199.99 in January of 2022 in the US, both online and at liquor retailers in California, Nevada, Texas, Illinois, New York, Massachusetts and Florida.

For more information, check out www.teelingwhiskey.com.