The good folks over at Teeling Whiskey are on a roll as of late, just now debuting their first in-house distilled Irish whiskey to an eagerly waiting fan base. The distillery in Dublin though is also known for access to large stocks of older whiskey and a range of casks for finishing, which is something they’ve showcased now and again through various limited releases. The latest of these is a new 30 year old which saw additional maturation in ex-French wine oak casks.

The new Teeling 30 Year Old, according to those behind it, was distilled back in 1987 and then matured in ex-bourbon barrels for some 25 years. This was followed by an extended finishing period of five years in ex-white Burgundy French oak casks. Bottled at 46% ABV, it is non-chill filtered and very limited with just 500 bottles in total being released. 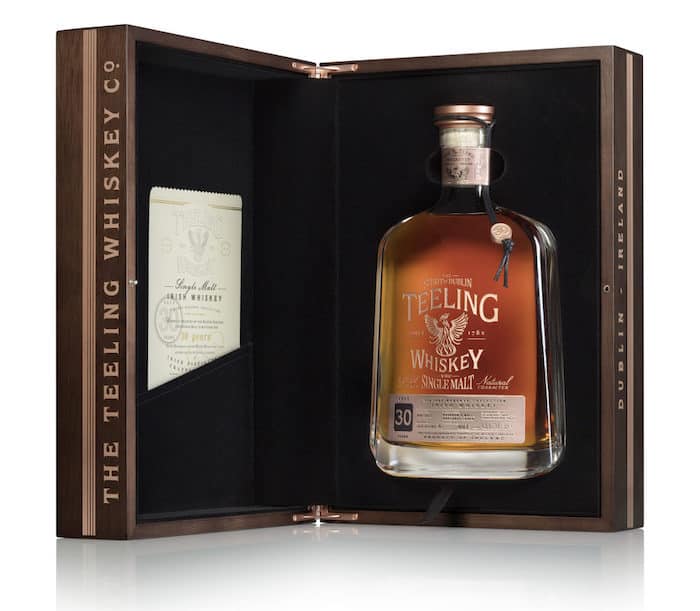 “We are extremely proud to release some of the oldest ever bottlings of Irish Single Malt and welcome this new addition to the Vintage Reserve Collection,” said Jack Teeling, founder of Teeling Whiskey, in a prepared statement. “This very limited release of 30-Year-Old Irish Single Malt is a one of a kind, due to the French white wine influence that transforms this whiskey into something truly special. There is nothing else like this on the market and gives whiskey drinkers the chance to own their own unique piece of Irish whiskey history.”

Each of the 500 bottles of this three decades old whiskey are hand bottled in unique decanter bottles and come in a high end wooden gift box with their own certificate of authenticity. They price at €1,500, or a little over $1,700 USD. It joins the previously mentioned Vintage Reserve Collection, a series of high end and very limited releases of rare and old Irish single malt. The last of these was earlier this year, and came in the form of a 34 year old.

30
Shares
421
Views
Share on FacebookShare on TwitterGet Our Newsletter
Read More Whiskey News
Whiskey Reviews: The Dublin Liberties Murder Lane And Oak Devil
Cheers to the Dads! Personalize a bottle of his favorite whiskey to create a modern gift for the modern man. Use code: FATHERSDAY20 for $20 off your next order of $100 or more at ReserveBar