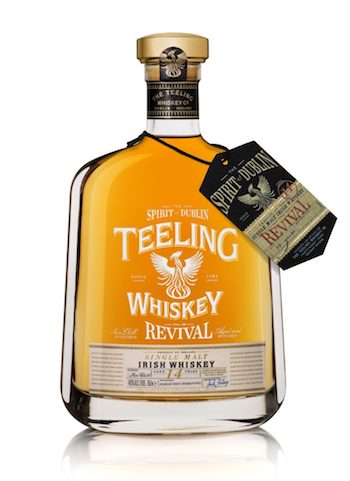 The Teeling distillery, as it continues to commemorate the opening of this Irish whiskey making facility in Dublin, Ireland roughly a year-and-a-half ago, is set to release the third edition of its Revival bottle line. This time around Revival Volume III, as it is called, was finished in special casks uncommon to usage in whiskey maturation.

The Teeling Revival Volume III, according to the distillery, takes 14-year-old Irish single malt whiskey that was matured in ex-bourbon casks and ages it for a further undisclosed period of time in 350 liter, ex-Pineau Des Charentes casks. Pineau Des Charentes is “a regional French aperitif, made in the southwestern regions of Charente, Charente-Maritime and, to a much lesser extent, Dordogne in western France. It is a fortified wine made from either fresh, unfermented grape juice or a blend of lightly fermented grape must, to which a Cognac eau-de-vie is added and then matured in oak barrels.”

That extra time in these casks has helped to develop a special tasting profile for this whiskey that’s “reminiscent of dried fruit and toffee pineapple rounded off with a toasted almond and dark chocolate bitterness that’s balanced perfectly with a lingering soft sweetness. A signature bouquet of honey and hazelnuts flavours tops off the dark chocolate undertones.”

“It is hard to believe we are just 18 months away from having Irish whiskey distilled from our new distillery in Dublin, “said Jack Teeling of Teeling Whiskey in a prepared statement, “and to honour this half way point we have decided to release something very unique to mark the occasion with the first ever Pineau des Charentes finished Irish whiskey. Our third Revival release will be limited to only 10,000 bottles and sold both through our distillery as well as our domestic and international distributors.”

Should you choose to seek out a bottle in Ireland, the UK, Germany, Belgium, Holland, Denmark or Italy, expect to drop €120, or about $130 USD.