Teeling Irish Whiskey, despite in the last couple of years having distilled and released its own Irish whiskey made in house at its distillery in Dublin, Ireland, makes use of older spirit previously produced somewhere else for a range of its releases. One particular case in point is across its higher end Vintage Reserve Collection, and the latest to join it is a 37 year old expression.

The new Teeling 37 Year Old Single Malt, according to those behind it, is the oldest whiskey ever released by Teeling and also one of the oldest bottles of Irish single malt ever released. It “was distilled in 1983 and matured exclusively in an ex-Bourbon cask for over 37 years before being hand bottled in a new style decanter at 41.3% straight out of the cask.” Only 175 bottles are being released.

“We are extremely proud and lucky to be able to release some of the oldest ever bottlings of Irish Single Malt with our Vintage Reserve Collection,” said Jack Teeling, founder of the Teeling Whiskey Company, in a prepared statement. “This very limited release of 37-Year-Old Irish Single Malt is truly a piece of Irish Whiskey history and amazingly for a whiskey of this age it is not over oaked but has a beautiful balanced taste profile. 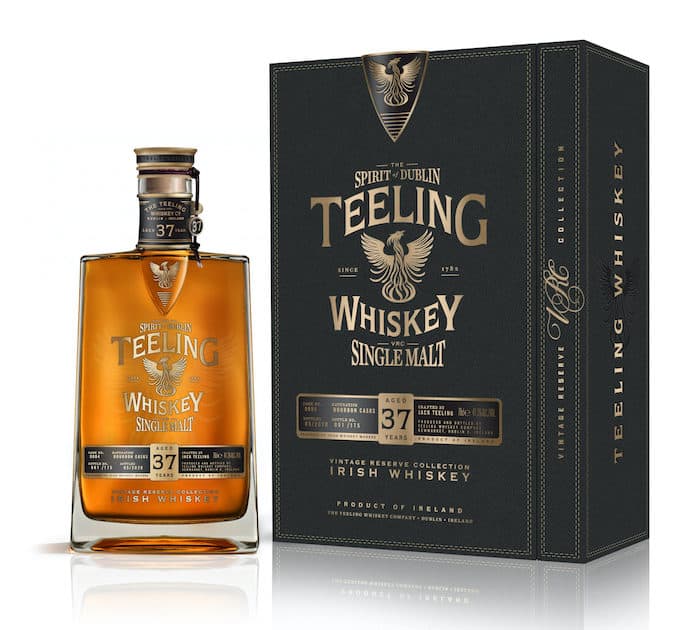 “There is nothing else like these Irish Single Malts on the market and each one represents a rare piece of Irish whiskey history in each bottle.”

Each bottle is individually numbered and comes with its own unique certificate of authenticity and invitation to come to the Teeling Whiskey Distillery for a very special tasting. Each has also been hand decorated with gold infill along with a handcrafted super premium gift box.

As it stands now plans call for this 37 year old Irish whiskey to price at €7,000, or around $8,300 USD. It will initially be available at the distillery before later rolling out a very select few partners domestically and internationally.