Slane Irish Whiskey, a rising brand in the increasingly crowded world of Irish whiskey, is a story we’ve been following for a bit now, including a review last year of their sourced product they were finishing themselves through a blending process. The distillery is looking to move beyond this into its own in house produced spirit now, having recently barreled their first cask.

The Slane distillery, which is owned by American spirits company Brown-Forman in collaboration with the Conyngham family of Slane, recently filled its inaugural cask, a sherry hogshead, with new make malt whiskey using barley harvested on the Slane Castle Estate. It is the first of many planned barrels, as there is said to be annual production capacity of 600,000 cases of Irish whiskey at the facility which was opened just last year. 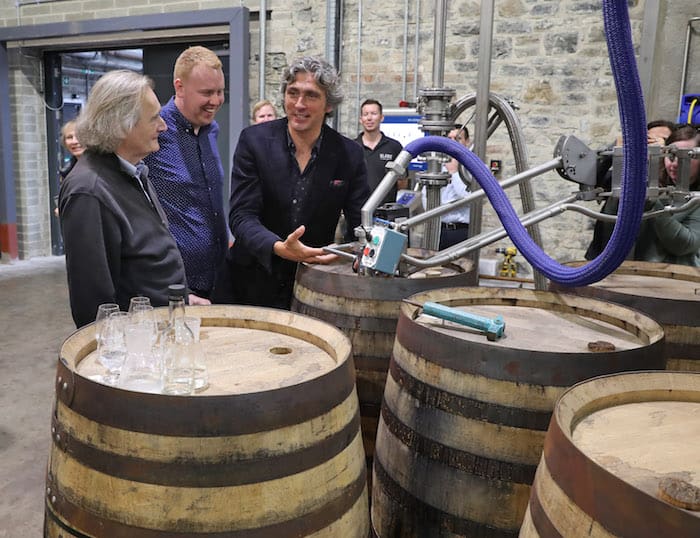 Filling the first barrel at Slane (image via Brown-Forman)

“This is a very special occasion for my family,” said Alex Conyngham, Co-Founder, Slane Irish Whiskey, in a prepared statement. “We could not have accomplished this much in such a short space of time without the partnership, knowledge, and expertise of Brown-Forman, the talented production team at Slane Distillery and the support of the local community in Slane. I am honored to play a part in bringing whiskey production back to Ireland’s Boyne Valley.”

For those unfamiliar with the Slane distillery, Brown-Forman invested $50 million in its construction on the grounds of the 250-year-old gothic farm buildings of the Slane castle. It features timber washbacks, column stills and hand-beaten copper pot stills and a small maturation warehouse, while the adjoining visitor center offers what’s described as “an interactive and immersive journey through the fabric of the Conyngham family tapestry and ancient art of whiskey making, including malting, fermentation and distillation.”

The whiskey itself, already on store shelves via the sourced product as mentioned earlier, goes through what’s called a “Triple Casked” maturation process. The liquid rests in virgin American oak barrels from the Brown-Forman Cooperage, seasoned American whiskey barrels and Oloroso sherry casks from Spain before being blended into the final product.

1.2k
Shares
914
Views
Share on FacebookShare on TwitterGet Our Newsletter
Get The Macallan® Rare Cask at ReserveBar. Shop now!