In our second installment in this two-part series about the history of Irish whiskey, we chronicle Irish whiskey’s astonishing comeback. For the first story, click here.

Just when it seemed that the last of Ireland’s historic whiskey distilleries were heading for oblivion, a remarkable turnaround began to take shape. The first sign was the purchase of Ceimici Teoranta (Chemicals Limited), a government owned column distillation plant in the Cooley Peninsula, in 1987. The purchaser, Dr. John Teeling, added two pot stills from the mothballed Comber Distillery to the 10 column stills, acquired the rights to a stable of historic Irish whiskey brands, and renamed the facility Cooley Distillery. Officially fired up in 1989, this was the first new Irish whiskey distillery, putting aside the new Midleton plant, in more than a century. Significantly, Cooley opted to double distill his whiskey instead of the triple pot still distillation done in Midleton.

In the meantime, French spirits giant Pernod Ricard came calling on IDL. At the time, IDL was locked in a bitter takeover battle with British spirit companies Grand Metropolitan and Allied-Lyons. Pernod-Ricard prevailed, acquiring control of IDL in 1988. Bolstered by Pernod-Ricard’s worldwide distribution network and its deep financial pockets, Irish whiskey began to reemerge in world markets. Jameson quickly became IDL’s flagship brand; emerging as the standard bearer of Irish whisky. By 2016, it commanded a staggering 78% of Irish whiskey’s US sales and 65% of its worldwide sales.

The reemergence of Irish whiskey, and the burgeoning interest in craft distilling, brought a steady stream of entrepreneurs and investors into Irish whiskey. By 2013, there were four separate distilleries producing and selling Irish whiskey. In addition to IDL and Cooley, Bushmills, which had been spun off from IDL and purchased by Diageo, was now operating separately, and Kilbeggan Distillery, a historic distillery first established in 1757, was modernized and restarted in 2007. In the meantime, other multinational spirit companies began to invest in the Irish whiskey sector. William Grant and Sons purchased Tullamore D.E.W. (2010) and Jim Beam, later to become Beam-Suntory, purchased Cooley (2012). 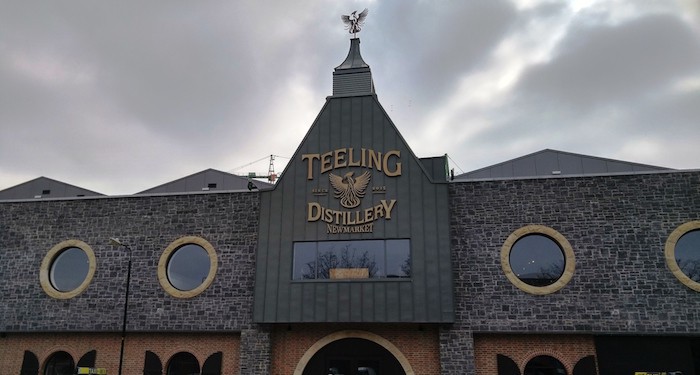 The entrance to the new Teeling distillery. (image via Jake Emen)

By 2014, the number of working distilleries had doubled to eight. Joining the original four were Echinville, Alltech, Dingle, and West Cork. In addition, determined to maintain their market share in the face of steadily increasing demand, IDL completed a 110-million-euro expansion of the Midleton Distillery that doubled capacity. By 2016, the number of working distilleries had increased to 17, although some of the distilleries were bottling whiskey that had been sourced elsewhere until their own production was ready. The new distilleries included Great Northern, Teeling Whiskey, Walsh, Blackwater, Tullamore, Connacht, Rademon, Renegade Spirits, and The Shed.

Even more significantly, in May 2017, spirits giant Diageo announced that it had received permission to convert the former Guinness Power House on Thomas Street into St James Gate Distillery. Production is slated to begin in 2019. In the meantime, Diageo is using existing stock, some sourced from its former Bushmills Distillery, to launch Roe & Co. The brand, part of Diageo’s Reserve Portfolio, is a tribute to historic Irish distiller George Roe. The new distillery is expected to have a capacity of around 55,000 cases of whiskey. That takes the number to existing or planned Irish distilleries to 33.

In June 2017, Teeling Distillery announced that it had received a significant, minority investment from spirits giant Bacardi. As part of the new partnership, Teeling would use Bacardi’s international distribution network for the export of its whiskies.

In addition, a large assortment of specialty bottlers had also emerged that were sourcing whiskey from a variety of producers to sell under their own brands. Among the best known is Celtic Cask, started by whiskey entrepreneur Alistair (Ally) Alpine. By 2017, there were around 100 private brands being bottled in Ireland, from low priced supermarket blends to rare high priced, premium offerings, like the multiple award winning Celtic Cask series.

According to Miriam Mooney, Head of the Irish Whiskey Association, “Irish whiskey exports grew by 300% in the last ten years. We now sell into 135 countries around the globe, with the US being our number one export market.” U.S. sales, she added, have increased from “5.2 million bottles of Irish whiskey in 2002 to 45.6 million bottles in 2015.”

Whiskey related tourism has also been targeted by the IWA. In 2016, over 650,000 people visited the five distilleries with visitor centers. In addition, Irish Whiskey Schools are now operated by IDL at the Midleton Distillery in Cork and by Ally Alpine’s Irish Whiskey Experience in Dublin and Killarney. The IWA is projecting tourist visits to increase to 1.9 million by 2025. They estimate that whiskey inspired tourism now adds $400 million to Ireland’s tourist revenues. By 2025, it’s projected to increase to $1.5 billion. By then, virtually every county in Ireland will have at least one working distillery. Dublin alone will have at least four. Plans are already underway to create several Irish Whiskey Trails.

The aggressive plans of Irish whiskey producers perforce beg the question, who is going to buy all this new whiskey streaming into the marketplace? Although Irish whiskey is the fastest growing segment of the world whiskey market, it is only one segment of a worldwide whiskey boom. Scotland’s whisky distillers have announced 30 new distilleries over the last several years and have also increased capacity at existing distilleries. Much the same is happening in the United States, especially with the burgeoning craft distillery movement.

India, the world’s largest producer of whiskey at 120 million cases, although most of that is not technically whiskey as it is molasses based, is ramping up its high end, cereal-based whisky production. Non-traditional producers like Taiwan, South Africa, Spain, Sweden, Australia, and even England and Wales have rapidly increasing production. More significantly, China, whose burgeoning whiskey market is seen by many whiskey producers as a guarantee of ever increasing consumer demand, is set to join the whiskey producers club in the next several decades. Instead of being a source of endless demand, China may soon emerge as a formidable competitor in the world whiskey market.

Ally Alpine, a longtime observer of the Irish whiskey industry and the founder of the Irish Whiskey Awards, believes that” the increase in Irish whiskey distilleries will bring a broader range of whiskey styles, including both triple distilled or double distilled Irish Whiskeys, single pot still, single malt, single grain, or a blend, some of which will use Irish turf (peat) to produce a peated style whilst some will be lightly peated or unpeated.” “Irish peat is very different from Scottish peat, especially the peat found on Islay and the Western Highlands,” he noted, and “it will be interesting to see what different characters we will find in these whiskeys.” “It is unlikely that there will be room for these new distilleries” he added, “unless they can develop a unique, signature style that is different but still consistent with the character of Irish whiskey and then the hardest part of all, which is finding effective routes to market.”

Jack Teeling, who in his forties, is already one of the “old men” of the Irish whiskey industry, shared a similar thought when he observed that “making whiskey is easy, its building an international brand with world class liquid that’s a challenge, especially when you don’t have the distribution reach and financial resources of the multinational spirit companies.” Irish whiskey tourism, he added “could turn out to be a key factor in creating direct to consumer sales and marketing that may prove the salvation of many of the new startups”.

Unfortunately, the Irish government’s tax policies may prove a significant road block to tourist driven Irish whiskey sales. Irish whiskey is significantly more expensive in Ireland than it is anywhere else. On average, domestic Irish whiskies are often 50 percent higher than the average prices in the rest of the Europe and North American. The average price of a bottle of Jameson Blended Irish Whiskey, for example, is $22 in North America. That same bottle will retail for an average of $15 in Spain and $30 in Ireland.

The Irish whiskey industry has come back from near oblivion to become the fastest growing whiskey category in the world. Having pushed its way back onto the world stage, it must now contend with a broad range of seasoned competitors who are determined to hang on, if not expand, their own market share. Growing their whiskey category is going to be a significant challenge for the Irish whiskey industry – but then again, more than one competitor has found out the hard way to never count out the Irish.

122
Shares
548
Views
Share on FacebookShare on TwitterGet Our Newsletter
Get The Glenlivet 18 Year Old at ReserveBar. Shop now!