Redbreast Irish Whiskey is getting set to release its fourth in the “Dream Cask” collection … the Oloroso Sherry Edition. Hand-selected by Master Blender Billy Leighton, the new release will be available in limited quantities only through Redbreast’s private members’ club, The Birdhouse.

Made by Irish Distillers at its Midleton Distillery in County Cork, the Redbreast Dream Cask Oloroso Sherry Edition is a 29-year-old single pot still Irish whiskey that master blender Leighton said celebrates the signature Redbreast style and represents the fulfilment of a dream to “share an annual release like no other.” 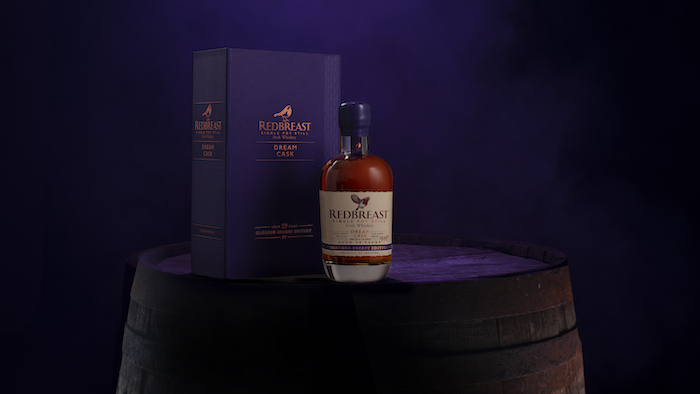 When selecting their whiskey of choice for this fourth release, Leighton and Blender Dave McCabe combined “innovation, tradition and craftsmanship” by vatting together four special whiskeys, aged for a minimum of 29 years in ex-bourbon, sherry and ruby port seasoned casks.

Leighton said the whiskeys were married in one single outstanding Oloroso sherry butt from Jerez de la Frontera in Spain’s Andalusia region, and left to mature for a further 15 months to bring what’s described as “an evolution of its characteristic flavors to the Redbreast experience.”

The distiller noted that the extended finishing time of this Dream Cask enabled the individual wood contributions to come together and take on a wide spectrum of mellow fruit flavors and pot still spices. The result is a rich Irish whiskey with notes of dried fruits, herbs and toasted oak and a complex aroma of liquorice, leather and nutmeg reminiscent of Andalusian bodegas.

“There is no greater joy in my job than to come across an excellent cask while conducting a sensory assessment of our whiskeys. It is from four such outstanding casks that this year’s Redbreast Dream Cask was born,” Leighton said in a prepared statement. “To craft the 2021 expression, we experimented with new ways of vatting, marrying and finishing to create something greater than the sum of its parts and we are delighted with the result.”

“The liquorice aromas from the Redbreast Dream Cask Oloroso Sherry Edition instantly transport us to the bodegas of Jerez, celebrating Redbreast’s relationship with the region for over three decades. Sherry seasoned casks have been at the heart of Redbreast Irish Whiskey since its resurrection in 1991 and we are thrilled that this year’s Dream Cask could pay homage to that iconic relationship,” Blender Dave McCabe added.

924 bottles of Redbreast Dream Cask Oloroso Sherry Edition will be available through an online ballot hosted on The Birdhouse website. The ballot will be live from May 17-25, when participants will be given an opportunity to purchase a 500ml bottle for €520, about $631 USD.