Proclamation Blended Irish Whiskey recently announced its launch into the U.S. market, bringing what those behind it believe is a quality Irish whiskey to domestic drinkers. Its blend of grain and malt whiskeys is triple distilled, aged in American oak barrels and includes a touch of sherry-finished malt. This whiskey is said to honor the historical 1916 proclamation that defined Ireland’s independence.

Proclamation is owned by Inis Tine Uisce Teoranta (ITUT), who has a team in Ireland that aimed to put together “an original Irish whiskey blend.” 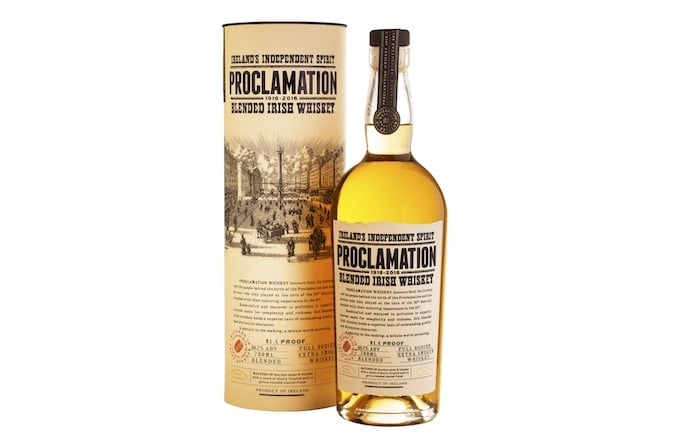 “We are very proud to bring Proclamation to the U.S. market. It serves to honor and celebrate the shared history between Ireland and America, a pivotal relationship that helped create the independent Ireland we know and love today,” said Stephen Cope, Managing Director of ITUT, in a prepared statement. “From its concept, historical reference, through to the labeling, blending and creation of the finished liquid, this whiskey has been expertly crafted through collaboration.”

“We wanted to celebrate Ireland’s independent spirit through a quality Irish whiskey, one that also tells the story of some of the unsung heroes of this time,” added historian, author, and publisher Mícheál Ó Doibhilín. “Proclamation Blended Irish Whiskey pays tribute to the three printers of the Proclamation, William O’Brien, Michael Molloy and Christopher Joseph Brady and acknowledges the important role they played during a hugely significant time in Irish history.”

Official tasting notes for this release are below.