The Redbreast single pot still Irish whiskey brand is a popular part of the larger Irish Distillers/Pernod Ricard Irish whiskey portfolio. The permanent line up of this brand currently includes Redbreast Lustau and 12, 15 and 21 year old offerings. Joining those now is a new release in the form of a 27 year old that’s been partially matured “in ruby port barrels from Portugal’s Douro Valley to bring a new complexity and depth to the Redbreast collection.”

The new Redbreast 27 Year Old, according to those behind it, spent over two and half decades aging under the “watchful eyes of the team at [the] Midleton distillery,” which includes Master Blender Billy Leighton and Blender Dave McCabe.” For over 30 years, said team “travelled to the Douro Valley in Portugal, where port has been produced for two thousand years, to discover the finest caves in the region in a quest to provide drinkers with a truly unique taste experience.

“After sourcing ruby port casks, the masters filled them with pot still distillate before leaving them to mature, then combined them with whiskey aged in bourbon and sherry barrels.   The ruby port barrels impart fleshy fruit characteristics with notes of toasted oak which complements the rich and robust style of the distillate.” 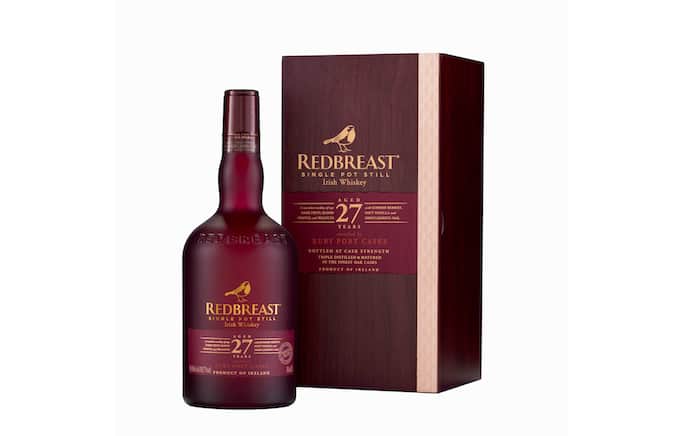 “It gives us great pleasure to reveal the latest member of the Redbreast Irish Whiskey family,” said Leighton in a prepared statement. “In creating this whiskey, Dave and I drew on our experience of working with sherry and other wine casks over the years as we have evolved the range. This time, we wanted to push the boundaries and yet create an expression that would seamlessly take its place at the head of the family.

“Nearly three decades in the making, we are incredibly proud to present Redbreast 27 Year Old – a cask strength Redbreast expression that is a joy to behold in each and every sip.”

Produced in limited quantities on an ongoing basis, Redbreast 27 Year Old is bottled at 54.6% ABV. It will initially be available starting this month in 11 global markets for around $500 USD. One of these markets is the United States, and it is here it will debut in 23 domestic markets, including Alaska, Arizona, Colorado, California, Connecticut, Florida, Hawaii, Illinois, Michigan, Minnesota, Missouri, Maryland, Massachusetts, Nevada, New York, New Jersey, New Hampshire, Ohio, Oregon, Pennsylvania, Texas Washington D.C and Washington state.

Official tasting notes for this new Redbreast are as follows.

441
Shares
9.6k
Views
Share on FacebookShare on TwitterGet Our Newsletter
Cheers to the Dads! Personalize a bottle of his favorite whiskey to create a modern gift for the modern man. Use code: FATHERSDAY20 for $20 off your next order of $100 or more at ReserveBar