Midleton is one of several popular Irish whiskey brands under Irish Distillers/Pernod Ricard. For a number of years now it has been under the care of master distiller Brian Nation. That has moved into new hands now though with his recent departure, and as a final gift of sorts to fans of this brand his influence can be found in this year’s Midleton Very Rare.

Midleton Very Rare 2020, according to those behind it, is the 37th edition of this range and represents a continued tradition of each year choosing hand selected whiskeys from the vast Midleton inventory for this release. Nation, for this offering, drew from single pot still and single grain Irish whiskeys laid down over the past four decades, resulting in a final expression containing spirits “aged from 13 to 35 years in lightly charred ex-bourbon American oak barrels.” 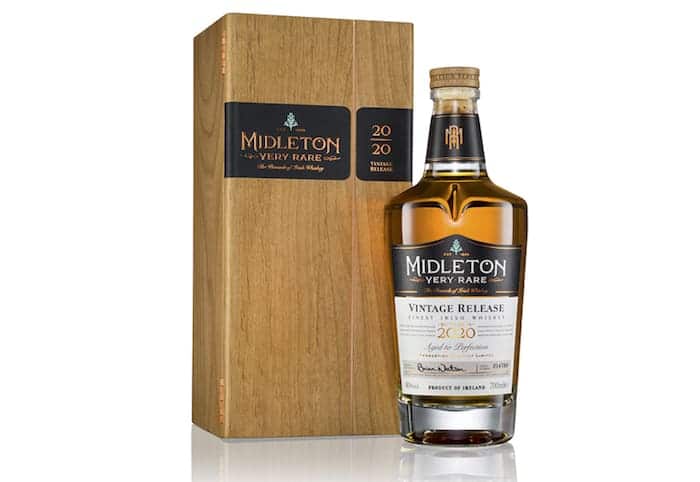 Of particular note this time around, it is said, is that Nation “selected a higher pot still inclusion when compared to previous vintages, while also increasing the use of refill barrels amongst his choice of casks.”

“As a colleague and friend to Brian for many years, I could not be prouder to present his final Midleton Very Rare vintage and his legacy as Irish Distillers’ Master Distiller, to consumers across the globe,” said Kevin O’Gorman, newly appointed Master Distiller at Irish Distillers, and long-time collaborator of Nation in a prepared statement. “Selected each year with passion and precision, this expression offers an initial burst of tangy fruity sweetness on the palate, with pot still spices building over time to add a mild prickle of chili oil.

“Indeed, Brian’s love of a single pot still is reflected in this exceptional whiskey, while preserving the balance and beauty for which Midleton Very Rare is renowned.”

This new Irish whiskey is bottled at 40% ABV and is being made available in Ireland, the UK, USA, Global Travel Retail, Australia, Germany and Canada in the coming months for a price of €180, or around $215 USD. You’ll find some official tasting notes for it below. It should be noted that, for the upcoming 2021 release, O’Gorman will be breaking from tradition and unveiling his first Very Rare earlier in the year.

Aroma
Initial top notes of cane sugar and vanilla intertwined with pepper and nutmeg spices, complimented by sweet orchard fruits and white chocolate fudge all layered over polished antique wood notes, showcasing an intriguing balance between spirit and wood thanks to the complex interaction from the many years spent in the finest oak casks.

Taste
Initial burst of tangy fruit sweetness of orange peel and sweet pear creating a succulent texture while the pot still spices build overtime adding a mild prickle of chilli oil. The presence of the charred oak remains constant in the background adding balance to the fruits and spices.

Finish
Satisfyingly long finish with the fruits slowly fading, allowing the oak and spices to linger until the very end.

35
Shares
14k
Views
Share on FacebookShare on TwitterGet Our Newsletter
Get The Glenlivet 18 Year Old at ReserveBar. Shop now!