The Jameson brand, a large part of the Irish Distillers whiskey stable under Pernod Ricard, teamed up last year with its Co. Cork neighbor Eight Degrees in a special collaboration that allowed for the latter to finish its dark Black Ball Metric Stout in Jameson barrels for a special release. The two have now turned the tables, finishing a Jameson whiskey in stout barrels.

The new Jameson Crested Finished In Black Ball Metric Stout Barrels, according to those behind it, is a variant of the regular Jameson Crested, an Irish whiskey that’s normally aged in both American bourbon barrels and Spanish sherry butts. With this offering it also gets the previously mentioned stout cask finishing. 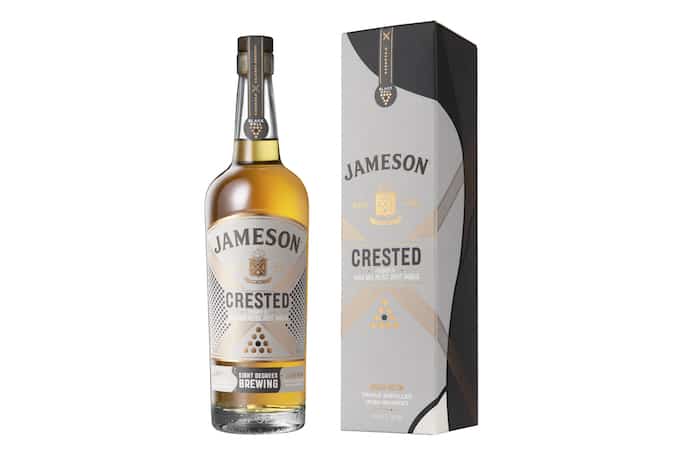 “We were delighted when the opportunity arose to create a truly special whiskey,” said Irish Distillers’ Blender Dave McCabe, in a prepared statement. “When we were selecting a whiskey to mature in these barrels, Jameson Crested became the obvious choice. Its higher pot still component and sherry cask inclusion allowed the whiskey to meet the impact of the stout head on, creating a balanced reaction.

“We filled the casks in November last year and carefully monitored the whiskey’s progress. After about four months of ageing we felt it was just right.  The stout influence is prevalent in the taste, complementing the whiskey beautifully. It’s a truly unique liquid, perfect when enjoyed neat, paired with a craft stout, or as part of a spiced cocktail.”

Less than 10,000 bottles of this Irish whiskey with be available globally, starting this month and pricing around €45 (about $55 USD). You’ll find some official tasting notes below.