Method And Madness Irish Whiskeys Brought To US By Pernod Ricard

The Method and Madness range of Irish whiskeys was introduced by Pernod Ricard’s Irish Distillers arm back in 2017 to Ireland. Since that time it has provided the distillery team at Midleton’s (the main Irish Distillers whiskey making facility) new microdistillery in Ireland “the space to take chances and breakthrough traditional category norms by exploring new styles of Irish Whiskey – both in the distilling process and unique casks types.”

With the range well established in Ireland, it is now coming to the United States as three new whiskeys, according to those behind them. You’ll find more official information on each, including tasting notes, at the end of this article, but in general what will be hitting the market here is “a sweet toasty Single Grain Whiskey finished in Virgin Spanish Oak Casks; a fruity, honeyed Single Malt Whiskey selectively finished in French Oak Casks, and a spicy Single Pot Still Whiskey finished in Chestnut Casks.” 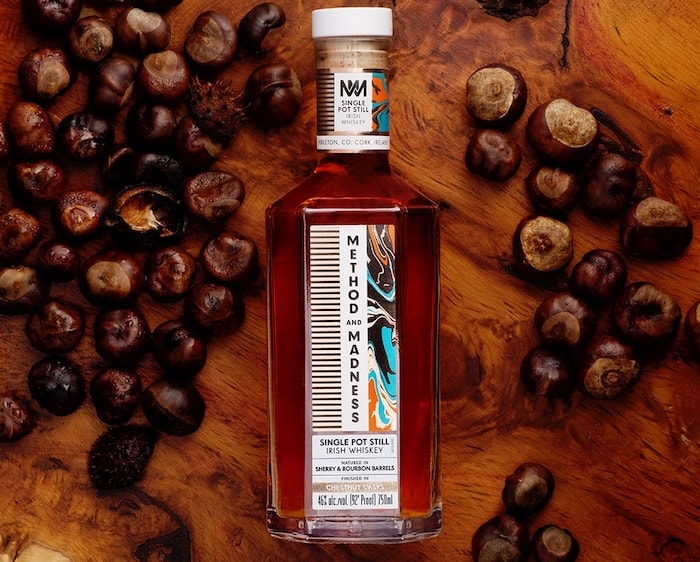 “Driven by inspiration from our legacy as well as our culture of innovation, our team of blenders, distillers and apprentices treat our microdistillery in Midleton as an experimental hub,” said Kevin Gorman, Master Distiller at Midleton Distillery, in a prepared statement. “This type of environment enabled us to trial and test various distillates without disrupting normal production which gave way for the creation of Method and Madness.”

After maturing in ex-Bourbon barrels to achieve a light, perfumed flavor on the exceptional grain distillate, the whiskeyhas uniquely been finished for 12 months in toasted, virgin Spanish oak from Galicia, North West Spain. The process added complexity, cask character and a spicy note until the perfect balance between the subtlety of the grain spirit and the contribution of the Spanish oak was skilfully mastered. The expression is bottled without chill filtration at 46% ABV.

The first Single Malt Irish Whiskey released from Midleton in recent memory, the whiskey has been initially matured in ex-Bourbon barrels, imparting flavors of malt and biscuit, and in a first for the category, has been part-finished in French Limousine oak for one year to add a lighter, floral and herbal note. The expression is bottled without chill filtration at 46% ABV.

This Single Pot Still Irish Whiskey has been matured in a combination of ex-Oloroso sherry and ex-Bourbon barrels, before being transferred to chestnut casks sourced from the Isére region in France.

As one of the world’s firsts, the French chestnut casks impart a distinctive sweetness that lightens the mouth-feel, increases depth and adds a mahogany glow. The expression is bottled without chill filtration at 46% ABV.