Ireland’s Killowen Distillery recently marked a milestone for the whiskey maker, opening their own cask of Killowen whiskey for the first time.

Founded by distiller Brendan Carty, Killowen’s team brings together what’s described as whiskey experts and enthusiasts from all walks, driven to find the character and tradition of ancient Irish whiskey.

Carty is said to be active and influential in the Irish distilling world, and self describes himself as “obsessed” with the revival of forgotten styles of native distilling. 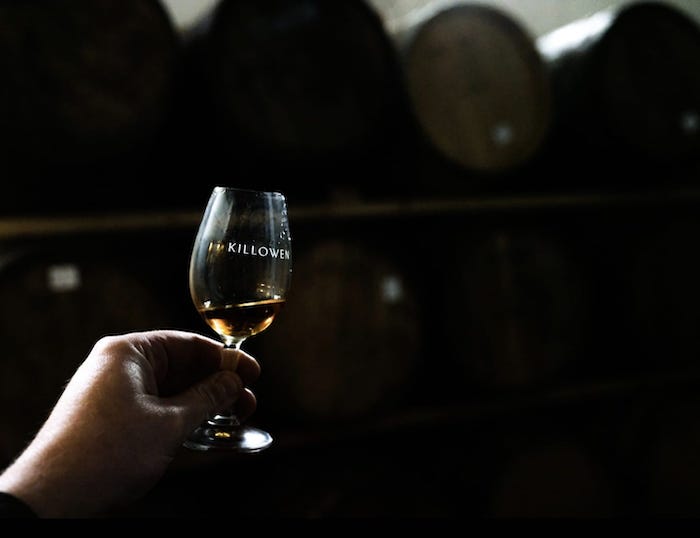 The recent occasion of opening their own cask for the first time happened to be shared by other members of the whiskey community that were in Newry at that time visiting the Two Stacks whiskey complex. It made for a “joyous occasion,” Carty said.

The cask opened, on its third birthday, was a broad mixed mash bill whiskey that the distiller described as “delicious, impressing everyone at the gathering who found it has a quality expected from whiskeys far beyond its years. A full bodied heavy PX sherry bomb, with a distillate that stands up against the rich cask and still shines through, offering generous notes of maple syrup, thick Canadian bacon, clove, butter, cream and Christmas cake.”

A statement from Killowen said this cask marks a watershed moment for Irish whiskey and a culmination of hard work and drive, borrowing from great historical minds such as Fionnán O’Connor, a growing interest in local produce, and a self determination in Irish whiskey.

“The unorthodox methods of a long, drawn-out production has really paid off and acknowledge our Irish Whiskey past in an adventurous and contemporary manner,” the distiller’s statement said. “We understand that upon its release, Cask 001 may be difficult to acquire due to demand. That said, other interesting casks will be released going forward that will become more accessible; as such, we graciously ask for your patience and understanding.”

Cask 001 could be released between now and July, and this will be done through an online ballot system. For more information or to get the product, check out www.killowendistillery.com.