Jameson Crested Finished in Devil’s Ladder Belgian Tripel Barrels is the result of Jameson Crested maturing in the beer-soaked barrels of Eight Degree’s Devil’s Ladder Belgian Tripel for four months, allowing for a taste profile of abundant spices, floral hops and sweetness, while the oak and malt work in tandem to add a toasted cereal character, according to official tasting notes.

“We are delighted that in recent years our relationship and indeed proximity to Eight Degrees Brewing here in Cork has created a canvas for collaboration and experimentation in this space, both as part of the Jameson Caskmates Series and beyond,” Irish Distillers’ Blender Dave McCabe said in a prepared statement. “The Belgian Tripel beer finish brings a balanced contribution to Jameson Crested, accentuating elements such as sweetness in the form of vanilla and brown sugar, as well as a roasted malt character and elevated clove notes.” 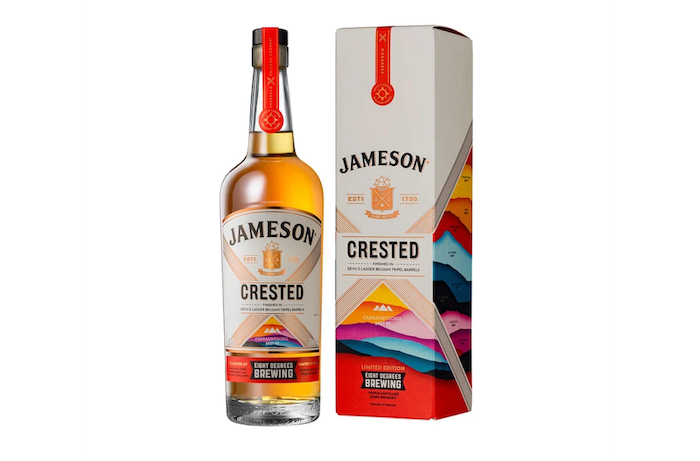 “It was in the spirit of innovation that we decided to rest Devil’s Ladder in Jameson sherry casks, adding sweetness and Christmas cake notes to our Belgian Tripel,” Head Brewer at Eight Degrees Brewing Daniel O’Shea said. “We are thrilled that the story has now come full circle, with our beer imparting a delicate hoppy character to this iconic Irish whiskey.”

With fewer than 6,000 bottles available, Jameson Crested Finished in Devil’s Ladder Belgian Tripel Barrels can be found at select Irish retailers and also select markets through Jameson’s online shop with a retail price of €50 (around $60 USD). Official tasting notes are below.

26
Shares
4.5k
Views
Share on FacebookShare on TwitterGet Our Newsletter
Cheers to the Dads! Personalize a bottle of his favorite whiskey to create a modern gift for the modern man. Use code: FATHERSDAY20 for $20 off your next order of $100 or more at ReserveBar