When one thinks of Irish cream, high proof is not immediately a consideration for products in this category. Well known Bailey’s, for example, clocks in at a meager 17% ABV (34 proof). It is said one doesn’t typically see ABV higher than this in Irish cream because the dairy in traditional examples of it curdles when the alcohol rises above that number. Now a new expression has emerged claiming to have solved this issue.

The new Hard Chaw Strong Irish Whiskey Cream, according to those behind it, came about after more than seven years of research and development, resulting in an Irish cream that is 50 proof (25% ABV), which is “50 percent more alcohol than all other brands.” The secret behind this? It is said that founder of the brand and former Gaelic football star Colm O’Neill consulted with outside distillers and chemists and determined that adding poitin (potcheen), an Irish moonshine, to the normal liqueur mix of Irish whiskey and cream solved the problem. How specifically it did so was not revealed.

“Finally, people who savor Irish cream’s beautiful flavor no longer will need to fortify their glass with a shot of whiskey,” said O’Neill, a native of County Cork and Colorado resident who’s a longtime owner of Irish pubs in the United States, said in a prepared statement. “It’s about time that one of Ireland’s many gifts to the world now matches the strength and vigor of the people who created it. We named our spirit in their honor.” 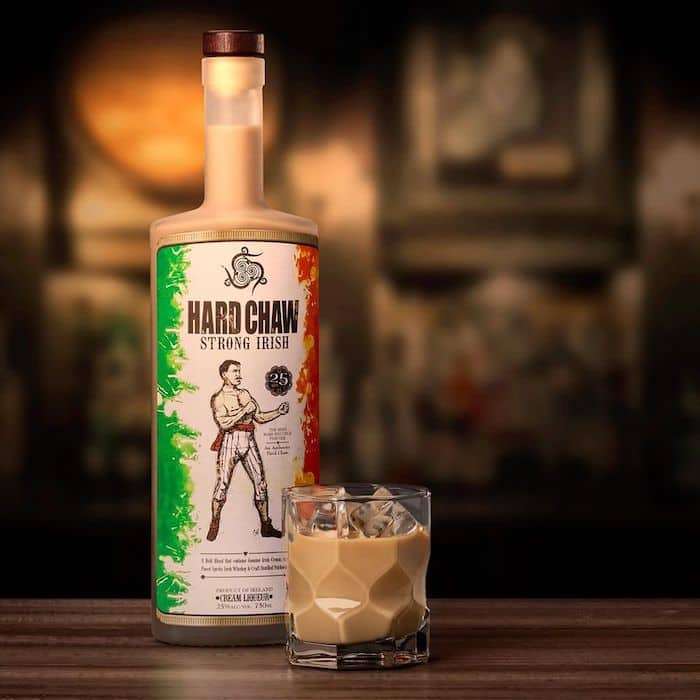 The back story of how Hard Chaw came to be is that in his role as pub owner, it is said, O’Neill “sold oceans of the ‘Car Bomb’ cocktail, which involves both Irish cream and Irish whiskey. He wondered why the bottle of Irish cream alone was never enough — it always needed the shot of whiskey.” As for the name Hard Chaw, it is a reference to a tough person, according to a recent article in Westword.

As it stands now plans call for Hard Chaw Strong Irish Whiskey Cream to price at $25 per bottle. It looks to be immediately available in Colorado, with no mention of other states as of yet.