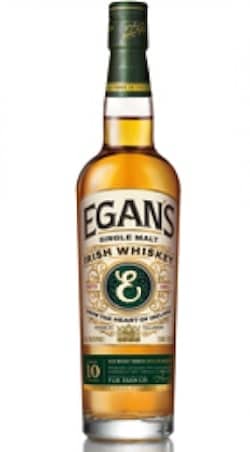 Depending on how you look at it, Egan’s Single Malt Irish Whiskey may be one of the newest to market, or one of the oldest. The whiskey is a rebirth of a family-owned brand (P&H Egan) that was formally incorporated in 1896 by Patrick and Henry Egan. Patrick and Henry seemingly were involved in many ventures, one of which was malting, brewing, distilling, and bottling at their enterprise house in Tullamore, County Offaly, Ireland. The business lasted until their fourth generation descendants voluntarily closed shop 72 years later, unable to compete with multinationals.

“While Egan’s Irish whiskey is technically new to the market, I prefer to look at it as a rebirth or revitalization of an old brand with true heritage and family involvement,” said Jonathan Egan, President of P&H Egan Ltd. “Egan’s Irish whiskey has a contemporary feel, yet pays respect to the rich and varied history of this celebrated brand. We’re thrilled to bring the Egan name back to Irish whiskey and we believe the time is right for Egan’s whiskey to take its place as a world-class Irish icon.”

Egan’s 10-year-old Single Malt (made from a single type of malted barley, all at a single distillery) is 100% pot still Irish whiskey, aged for 10 years in oak casks before Egan family selection and approval. It comes out at 47% alcohol (90 proof) with a suggested retail price of $49.99 and is now available across a number of major markets in the U.S. Egan’s 10-year-old Single Malt is also non-chilled filtered. While this leads to a mild cloudiness, it also generally allows whiskey to retain its cask imprint and full flavor.

Palate: Certainly the best of the notes, bright and sweet (not too syrupy) – a mix of honey and Christmas spices, then some earthy notes. Coating, sweet finish.

The viscous quality and spice notes make me reach for it with dessert, perhaps paired with a flaky marzipan tart. It’s lovely on it’s own, sweet but with sass, certainly something new that could make a worthwhile addition to your Irish whiskey line-up.

115
Shares
2.5k
Views
Share on FacebookShare on TwitterGet Our Newsletter
Get The Macallan® Rare Cask at ReserveBar. Shop now!