Dingle Distillery, a relative newcomer to the world of Irish whiskey, recently launched its fourth Single Pot Still Release. The distillery, located in Ireland’s County Kerry, has been slowly creating small batch single pot still whiskeys since 2018, with the third release arriving at the end of 2019.

This fourth release was matured using a combination of 25 fully matured bourbon and Oloroso sherry casks, and has been released in a run of 8,000 bottles split between Irish retailers and international markets. 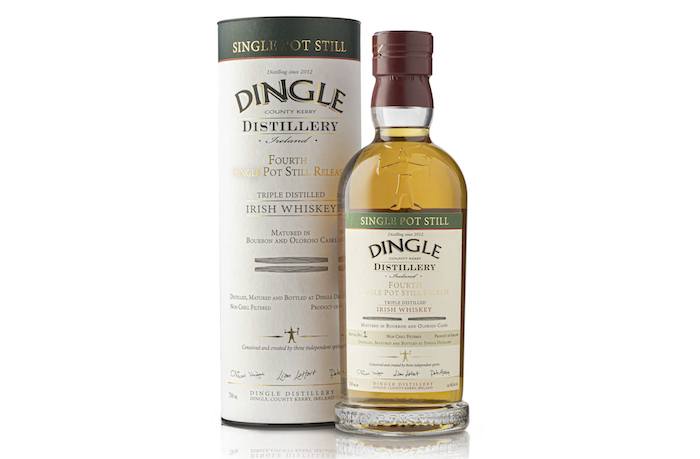 In a first for the distillery, Dingle has also produced 500 bottles of a cask strength edition of this new Single Pot Still Release, as a nod to their Founding Fathers, a collection of whiskey enthusiasts who invested in this young business through the purchase of their own individual cask of whiskey.

“It has been an absolute pleasure to play my part in creating the latest whiskey release from the Dingle Distillery,” said Graham Coull, Dingle’s Master Distiller, in a prepared statement. “Our Fourth Single Pot Still Release combines fully matured ex bourbon and ex Oloroso sherry casks to produce a whiskey which allows the uniqueness of the Pot Still spirit and the quality of the wood to shine through.”

“When my father Oliver Hughes and his business partners Peter Mosley and Liam LaHart filled the first casks at Dingle Distillery in December 2012,” added Elliot Hughes, Managing Director at Dingle Distillery, “the distillery was one of the first to buck the whiskey revival trend in Ireland, part of a new generation of artisan distilling.

“With an ambition to create something special in Dingle, the very first small batch whiskey was released in December 2015 with just 252 bottles. Four further batches have followed, along with three Pot Stills – indeed Dingle was the first distillery outside Midleton to release a Pot Still.

“We’re as passionate about flavoursome, well-crafted spirit today as we were then, and we’re so excited and proud to launch our Fourth Single Pot Still Release.”

Dingle Distillery’s Fourth Single Pot Still Release is available worldwide for €95.00 (or around $115 USD) per bottle. Official tasting notes are below.

21
Shares
1.9k
Views
Share on FacebookShare on TwitterGet Our Newsletter
Get The Glenlivet 18 Year Old at ReserveBar. Shop now!