Bushmills 12 Year Old comes to the US market only under the care of the distiller’s recently appointed master blender, Alex Thomas. And the single malt is the first expression to officially debut the brand’s new bottle and packaging for their line of single malts.

The Old Bushmills Distillery has a 400-year history of whiskey-making and an extensive stock of malts with unique age statements, rare cask types and finishes. 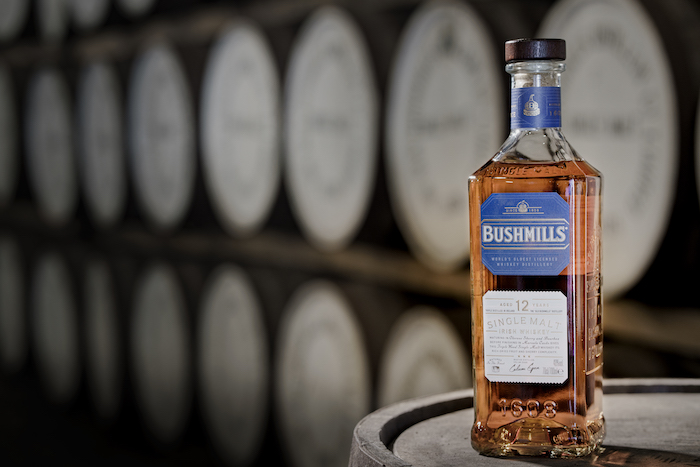 Having first joined the historic Irish distillery in 2004, Thomas spent 17 years honing her craft before assuming the role of Bushmills’ master blender.

A prepared statement from Bushmills notes that Thomas will be responsible for nurturing the Irish whiskey’s portfolio of aged single malts, spearheading product development and working alongside Master Distiller Colum Egan.

Building on the legacy of generations of Bushmills’ whiskey makers to come before her, Thomas said she intends to make her own mark as master blender, while holding true to the Bushmills recipe and style that has been passed down for centuries.

“The Old Bushmills Distillery holds a very special place in the history of Irish single malt and the whiskey category as a whole, and it is a true privilege to be appointed as Master Blender,” she said. “Bushmills 12 Year Old is an exceptional malt that speaks to our rich brand history and expertise, and I am thrilled that it will be released to the United States for the first time while under my care as master blender.”

Bushmills 12 Year Old is made from 100-percent unpeated malted barley, with spring water from the River Bush, and is triple distilled in small batches in traditional copper pot stills.

The distillate is a blend of two whiskeys that have aged minimally 11 years – one in Oloroso sherry butts and the other in bourbon barrels. To complete the process, fortified Marsala barriques from Sicily are used for 6-9 months to impart a finish to the whiskey, layering on what’s described as extra flavors of spiced fruit, sweet notes of brown sugar, and a light toasted nut character.

Bushmills 12 Year Old marks the debut of a new bottle and packaging to be implemented across the brand’s current malt portfolio of Bushmills 10, 12, 16 and 21 Year Old Single Malts and several exciting upcoming releases.

Bushmills 12 Year Old is currently available in select markets and quantities throughout the United States. The whiskey will officially be rolled out across all U.S. markets starting in February at a suggested retail price of $59.99 per 750mL. It clocks in at 40% ABV (80 proof).