Bourbon powerhouse Brown-Forman, aiming to look beyond American shores with regards to whiskey production, had announced in June plans for a $50 million investment in a new Irish distillery. Ground has now been broken there, with some new details being revealed as to what exactly the Slane Distillery will be up to.

Here’s what Brown-Forman had to say about its plans at the Slane Irish whiskey facility:

Slane Distillery, which will also include a visitor experience, is planned to open in late 2016. The new distillery will create nearly 25 new full-time jobs while the construction process will support approximately 80 jobs. The distillery is being built in the grounds of Slane Castle which is located in the middle of a 1,500 acre estate in the heart of Ireland’s Boyne Valley, 30 miles north of Dublin.

The distillery and visitor center, which is in the historic stables complex adjacent to Slane Castle, will involve the 18th century buildings being restored and converted to house both the production operations and the consumer experience. The first Slane Irish whiskeys will be launched to market in early 2017 – initially using high quality whiskey purchased from other Irish distilleries and finished to Slane’s exacting recipes and specifications while the first whiskey from the distillery is laid down to mature. Upon completion it will have a potential output of more than 600,000 cases.

The greater Slane Castle estate is certainly a place of historic note in Ireland, being the home of Henry Conyngham, the eighth Marquess Conyngham, and his son, Alex Conyngham, the Earl of Mount Charles, whose family has been part of the Slane community for generations, according to Brown-Forman. 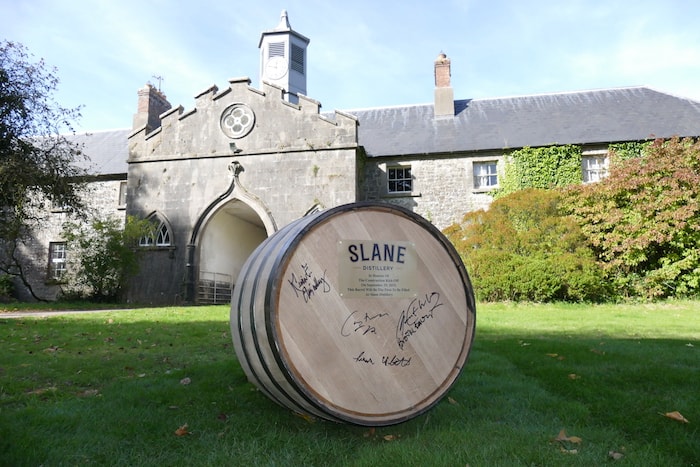 “Whiskey by its nature requires a long-term approach, and we look forward to bringing people on a journey of discovery with us,” said Alex Conynghim in a statement. “We will offer a range of blended, pot still and single grain Irish whiskeys in the premium and super premium segments. Visitors will be able to come here and literally see where the grain is growing and how we are producing it with care.”

As we had mentioned when we last wrote about this, there is already some Slane Castle Irish Whiskey on the market, ranging in the $30 price point on average. An article from Whisky Advocate a few years back indicates it to be a blended whiskey that was originally distilled at Cooley before Beam ceased production of it in 2012.  The Conynghams had planned to move forward with their own whiskey distillery thereafter, but with Brown-Forman having purchased “all shares of Slane Castle Irish Whiskey Limited” it is now the owners of Woodford Reserve who will be taking what was being previously envisioned to an even higher level.

“Brown-Forman brands are founded on heritage, quality and authenticity, and there is nowhere as real as this beautiful and historic part of Ireland,” noted Lawson Whiting, Brown-Forman executive vice president and chief brands & strategy officer. “We will leverage our wood and whiskey making prowess to create world class whiskey at Slane Distillery.”

172
Shares
192
Views
Share on FacebookShare on TwitterGet Our Newsletter
Get Jefferson's Ocean at ReserveBar. Shop now!