Unlike bourbon and Scotch, which have notoriously stringent rules for production, the regulations for Canadian whisky are relatively lax. While Americans consume 75% of the whiskey produced in Canada, until recently, lower-quality Canadian whiskies were most common on American shelves. In recent years however, Canadian whisky has undergone a transformation as more quality whiskies have started to pop up in liquor stores across America.

Sazerac, the company behind the ever-popular Buffalo Trace bourbon, have continued their goal of releasing quality Canadian whisky in America with their most recent outing, Legacy Small Batch Canadian Whisky. This rounds out their other offerings including Royal Canadian (which retails for $25) and Caribou Crossing ($50). Legacy is made from imported mature whisky from Canada (aged at least 3 years) and bottled at the Buffalo Trace Distillery in Frankfort, Kentucky.

There is typically very little information on the specifics of how most Canadian whisky is distilled. Furthermore, unlike their U.S counterparts, Canadian whisky producers don’t use mash bills. This because the individual grains are distilled separately and then blended after being distilled. In the case of Legacy Whisky, there isn’t even an age on the bottle. While this may give seasoned whisky drinkers pause, don’t be fooled by the lack of information. This whisky lets its flavor do the talking.

Blending of Legacy Small Batch Canadian Whisky is overseen by Master blender Drew Mayville. A Canadian himself, he’s been working in the beverage industry for over 30 years and oversees all of the Buffalo Trace whiskeys as well as the Legacy imprint. 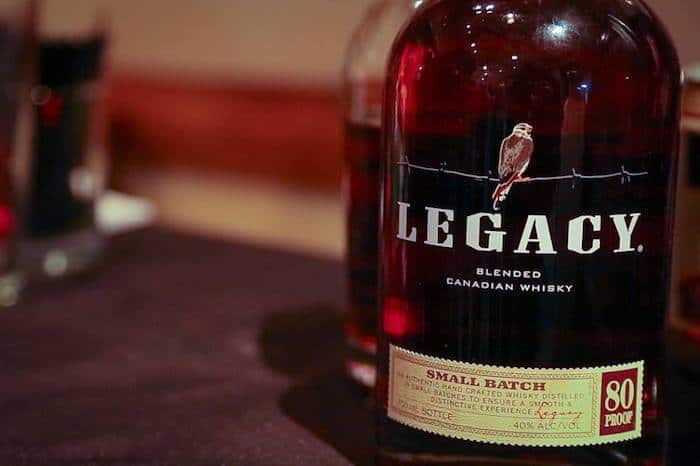 Nose: The nose is bright and opens with hints of cardamom, cloves, and juniper. After a while, a stronger scent of evergreen trees and pine peeks through.

Palate: Unlike the nose, the flavor of this whisky is dominated by a floral sweetness. The spice is still present, but there are decidedly more complex flavors that appear. Imagine honeydew cut with ground pepper and subtle rye spiciness.

This is a fantastic and affordable introduction to Canadian whisky. The taste is complex without being overwhelming, and the price is affordable. Legacy Small Batch Canadian Whisky is a great option for anyone who wants to branch out into a whisky style that doesn’t typically get a lot of love.