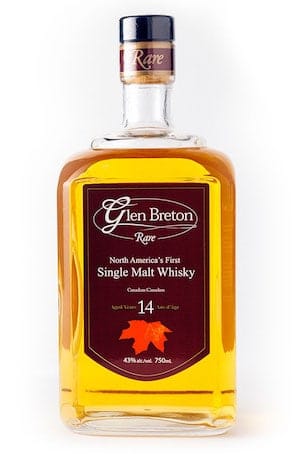 With their eight year aged product first available in 2000, Glenora holds the esteemed honor of being one of the first distilleries in North America to make a single malt style expression. Shortly thereafter, they found themselves in trouble with the Scotch Whisky Association, Scotland’s whisky trade group, over the use of the word ‘Glen.’ Inspired by the rich Scottish cultural tradition in their particular corner of Nova Scotia, Canada, Glenora was able to prevail over these legal troubles in 2009 and now, many years and releases later, Glen Breton is available in anywhere from 10 to 25 year expressions.

The distillery isn’t shy about indicating their Scottish roots and inspiration all over the packaging for this product (which includes a chincy gold foil-lined box), but promises that it maintains a “unique character all its own.”

Back in the 1800’s, Nova Scotia (translates to ‘New Scotland,’ in case you weren’t aware) attracted a slew of Scottish immigrants due to the terrain’s similarity to their beloved highlands, which are ideal for raising sheep. Along with them came their country’s whisky traditions, which made Cape Breton Island the perfect setting for the Scottish-inspired distillery. The island’s small town of Glenville is supplied with fresh water from MacLellan’s Brook, a highland stream that flows down through the distillery property, which the owners claim is “one of the purest, cleanest waters in North America,” and obviously perfect for making whisky.

With tradition seeping from their surroundings, inspiration in their back pocket, and over 25 years of experience creating the same product, one would imagine the liquid inside this bottle should be an immediate throwback to those Scottish highlands. Not only has it achieved the familiar, warming profile, but they’ve also proven that they’ve earned the use of the word “Glen” in their whisky’s moniker.

Appearance: This spirit pours near-clear with a dull yellow hue, akin to a dense white wine but with silky, fine legs cascading slowly down the glass’ interior. Its clarity makes up for its lack of brilliance in appearance.

Nose: A balanced bouquet emerges quickly upon creating proximity to the glass. Aromas of soft oak, vanilla, honey, and sourdough arrive first. Once the palate is adjusted, finer notes of strawberries and graham crackers rise the the surface, with an acceptable pinch of chemistry set in the mix. It all comes back to a rounded, mild woody smell, which dominates without being aggressive.

Palate: The first thing I notice on the first sip is how benefecial 14 years have been for this liquid. Its roundness and cohesiveness creates a singular, complex flavor followed by appropriate heat. This fine melding of butterscotch, black pepper, a mid-palate note of unexpected sweetness, a wisp of smokiness, and a perfumey finish of spring flowers creates an interesting flavor which holds interest with its layers yet finds quaffability in a smooth, velvety mouthfeel and lack of extreme angularity.

What we have here is years of experience and commitment to tradition that you can actually taste.

While not the most interesting or unique single malt whisky out there, Glenora Distillery has shown us that a quality Scottish-inspired product can emerge from North America and hold its own amongst the originals. It’s also really great on its own without any accoutrements (ice, water), adding yet another notch to the belt of the Glen Breton 14.

If I could offer any advice to the people at Glenora, it’s to ditch the cheesy packaging and class up your brand. The liquid inside this deceptive bottle tastes way better than it looks from afar.