In case you haven’t heard, rye whisky is going boom. In 2015 Fortune noted that rye whisky sales volume was up 536% since 2009. As has been well documented now, the unexpected rye boom left many brands scrambling to find stocks of aged rye whisky. 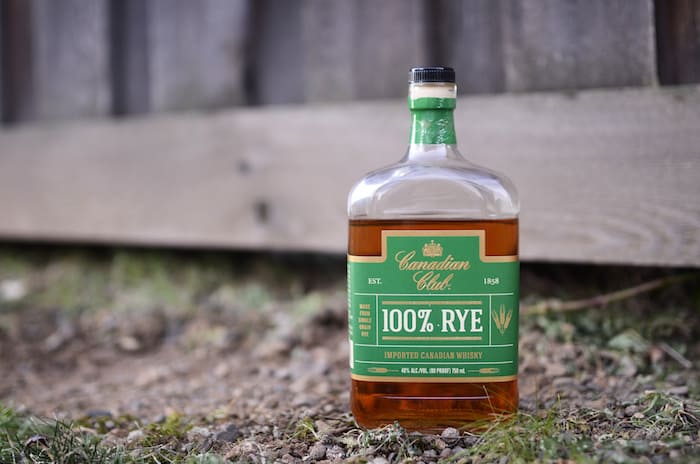 This Canadian whisky, which debuted in the US last year and in Canada in 2014, is a blend of whisky aged in three different types of barrels – new American white oak barrels, once-used bourbon barrels, and once-used Canadian whisky barrels. Canadian Club 100% Rye Whisky lacks an age statement, retails for just shy of $20, and clocks in at a mild 80 proof.

Appearance: In a Glencairn, the whisky appears a light honey brown.

In this case, toasted cereal notes, attributable to the grain, dominate the nose. Vanilla and light spearmint notes appear underneath.

Palate: The front of the palate leads off with light baking spice notes and cream. As the flavor develops, the toasted grain notes from the nose emerge with a slight bitter edge. In the mid-palate, a light floral note from the rye grain balances with the spice notes, and a sweet undertone of caramel and vanilla rounds out the flavor profile.

For the finish, a toasted grain note mixes with less pronounced notes of cinnamon and clove. At 80 proof, it isn’t surprising that the finish is light and short.

Overall, Canadian Club 100% Rye Whisky is acceptable, but not memorable. The flavor profile, due to some of the rye whisky being aged in used cooperage and the low bottling proof, is very light.

Compared to other popular ryes, such as Sazerac rye and Rittenhouse bottled-in-bond rye, Canadian Club 100% rye lacks the strong rye and barrel notes. In a mixed drink, the Canadian Club rye would be quickly overwhelmed by mixer flavors.

96
Shares
6.4k
Views
Share on FacebookShare on TwitterGet Our Newsletter
Get The Macallan® Rare Cask at ReserveBar. Shop now!