Whisky Making On The Young Side At Crown Royal

October of last year found me at the Crown Royal distillery in Gimli, Manitoba, Canada, surveying what is certainly one of the larger whisk(e)y making complexes I’ve been to so far. This massive 360 acre property, run by around 80 employees, is the heart and soul of Canada’s most popular whisky brand. It’s not exactly a tourist friendly facility – in fact if you were to drive by here from a distance you might think it some kind of industrial plant – but what it lacks for in looks it more than makes up for in the economic engine which is Crown Royal.

As I toured the facility and met those who work here, I ran across one Charisse Woods, a mid-20s associate distiller who might seem more at home in some craft distillery somewhere in the United States versus here at the giant Crown Royal facility. Hers is an interesting story though of how younger distillers don’t always need to be at the cutting edge of whisk(e)y production to make a contribution to the industry, particularly helping to ensure quality and consistency remain at the forefront of Crown Royal production.

I got the chance to follow up with Woods after the Crown Royal tour to chat with her about her time at Crown Royal and what she is liking about it so far.

Note this interview has been edited for clarity and brevity. Also, I visited Crown Royal as a guest of Diageo, and while most expenses were covered by them, this article remains under independent editorial control of The Whiskey Wash. 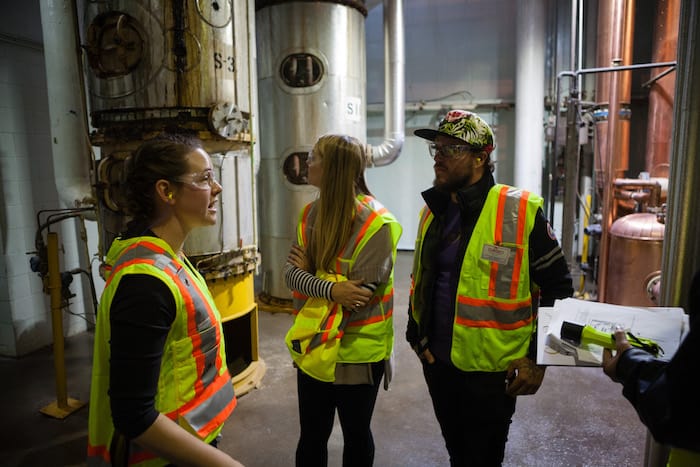 The Whiskey Wash: Lets talk a little bit first about your background. Tell me a little bit about how you got into making whiskey in the first place.

Charisse Woods: I was going to school at University of British Columbia in Okanagan for my bachelor of science in chemistry. Trying to decide what I wanted to do with my bachelor of science. The options for a chemistry major were kind of about four. I could go on and be a teacher, continue my studies and become a professor, become a lab tech, or go into the medical field. I didn’t feel like any of those fit, so I decided beer. Beer is kind of like chemistry.

I job shadowed at a local brewery where my grandmother’s boyfriend’s brother was consulting them on their brewery, but he was also helping them start a craft distillery. He suggested to me that the craft distillery option was a little bit more applicable to chemistry, and he felt it would be a better fit for me. That is how I started distilling.

TWW: How many years back was that and what’s your current age?

TWW: You jumped into distilling at a relative young age. How did you end up at Crown Royal?

Woods: I worked at this craft distillery for a year and a half. After this year and a half, I graduated from university. I had a year left basically, so I went to school and worked at the distillery at the same time. Then, after my year and a half, I wanted to make different things. The company wasn’t going that direction, so I left, and I started applying to distillery jobs. Basically anywhere in the world. I got lucky that when I applied for the opportunity for the associate distiller role for Diageo, that they hired me.

TWW: How did you feel jumping from a small operation to something as big as Crown Royal?

Woods: I am the associate distiller.

TWW: What does associate distiller mean exactly? Where is that in the hierarchy of distilling and blending at Crown Royal?

Woods: Associate distiller is a training program to make sure that the knowledge in the industry in North America is maintained and passed down. I am in a training program, currently designed for two years. It may be extended for three. I am the first one that they have.

Woods: The most challenging thing about learning here is trying to find where do you start. At what piece of equipment do you start at so that you can learn it, and how do you make that work for how you personally learn? For example, the stills. We have 12 different columns, and there’s five different types of stills. You just have to start with one type – for example the beer still is one type with two columns. You work from there and you just learn everything you can about those columns.

Then, you look into how they impact the whole process. Where that liquid that you created from that goes to. Where it came from. It kind of just branched up from there. Once you’re done with that, you have to move on to the next process. We go to the batch rectifier, and where the liquid comes from. Where it goes, and how it’s produced within that still itself.

TWW: Is there a particular part of the Crown Royal distillery you like hanging out in more than other areas? If so, why?

TWW: Talk a little bit about the difference between distilling and blending at Crown Royal. How do those two factors interplay in making the final product?

Woods: Distilling is the creation of the spirit, and the distillate. It creates this clear liquid, and we then put it into a barrel and age it. Whereas the blending, the blending portion comes in after the maturate has been aged, and the blenders will go through all the available bonds to them, and say, okay, this bond is ready for this kind of product. This bond is ready for that. Then, they pull pieces of bonds and put them together to create a blend. That is a masterful act.

I will say they have many, many bonds available to them. To pull pieces from each to create one, whereas in distillation, we create the liquid that goes into it. The importance in the distillation is the quality and the consistency. If we can make it consistent to that every single time we distill a liquid, then that makes the blender’s job easier.