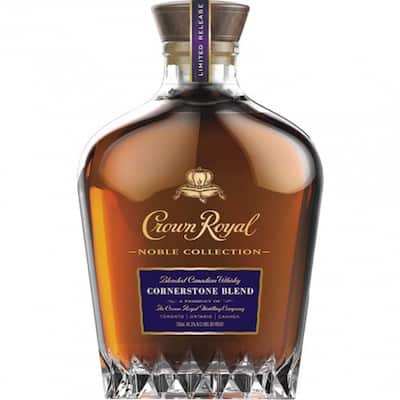 With the controversy of Jim Murray’s 2015 whiskey of the year pick finally dying down, the time seems right to visit Crown Royal once again to determine its possible merits. Slightly more limited in release and with a steeper price point than Northern Harvest Rye, Crown Royal Cornerstone Blend has once again aimed to capture the ever-profitable high-end limited-release market.

Apparently a blend of the brand’s “three more essential whiskies,” whatever that truly means, Crown Royal Cornerstone Blend is the first in a new series of releases under the Noble Collection moniker.

Although a non-age statement release, Crown Royal Cornerstone Blend is purportedly “61% of a “bourbon-style” whisky with a 60% corn, 36% rye and 4% malted barley mashbill, 6% of Coffey rye featuring the same mashbill but made on Crown’s Coffey still, and 33% of a high-rye whisky, at 96% rye, 4% malted barley. The youngest whisky in the blend is 8 years.” A Canadian whisky through and through, the blend is aged in neutral oak barrels and clocks in at 40.3% ABV.

Palate: The first impression on the palate is cardboard. Sweet dustiness follows through from the nose, being led by milk chocolate and acrid cherry soda. Very, very light bodied, Crown Royal Cornerstone Blend has almost no mouthfeel to speak of. The mouthfeel that’s there is slightly buttery, leaning towards oil-based fakey margarine. Overwhelmingly flat on the palate, cardboard remains throughout the tasting experience. The finish drips with sour milk and waxy low-grade chocolate. Short and bitter.

Although not as offensive as other Crown Royal expressions, Crown Royal Cornerstone Blend is certainly not a whisky I would ever consider paying money for. The low proof and ghostly body make for a whisky that is both un-mixable and entirely chuggable. Although easy to drink, it doesn’t make for a very memorable drinking experience. Like eating the wrapper along with the chocolate bar.