If you haven’t heard of Collingwood, that doesn’t surprise me. The Canadian brand remains in the shadows of huge labels like Crown Royal and Canadian Club, yet that doesn’t mean you shouldn’t try a pour of it when you get the chance – it is indeed a smooth drinker.

Collingwood’s new ambassador, Alexis Green, is also a smooth talker. Earlier this year, Green stepped into a brand-new ambassador position created for Collingwood, which is owned by Brown Forman. On a recent visit in Portland, Oregon we sat down with Alexis to talk about Collingwood whiskey, what makes it special, and how it feels to be the brand’s very first official ambassador. 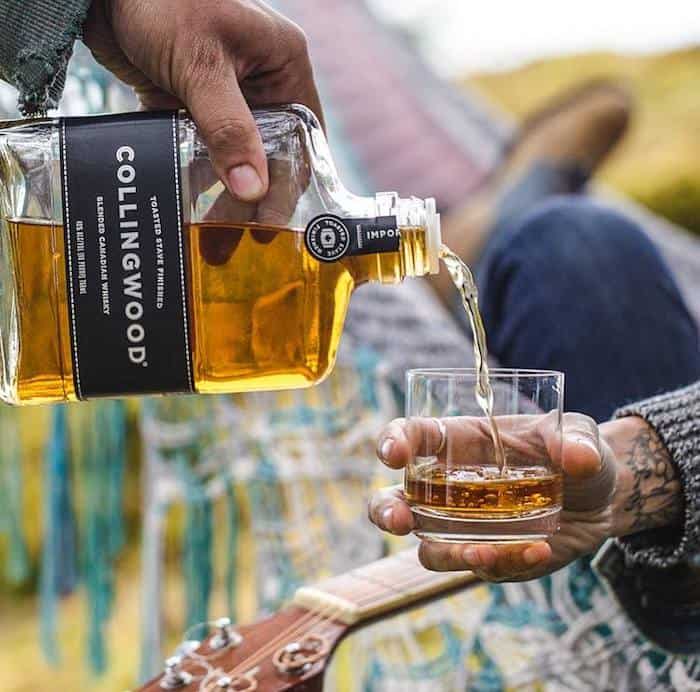 Note this interview is edited for length and clarity.

The Whiskey Wash: So we are talking today with Alexis Green, who is the brand ambassador for Collingwood, a Canadian whiskey brand managed by Brown Forman. Can you tell us a bit about Collingwood and its origin?

Alexis Green: Collingwood whiskey comes from the real town of Collingwood, Ontario, about an hour and a half north of Toronto on the southern end of Georgian Bay. The whiskey was created in part by our Woodford Reserve Master Distiller Chris Morris, so what we use is a locally sourced grain from Canada, and all of our corn comes from within about 200 kilometers of the distillery, so we work really closely with the Ontario Grain Farmers Association.

Then we take our water from the pristine Georgian Bay, which was formed by a glacier 25,000 years ago. We have access to amazing water and, for whiskey making, we know how important it is. As it’s one of the five sources of flavor, you want to make sure that it’s iron free, as that contributes a great deal to the quality of the whiskey that you’re making.

When we get the grain we mill it onsite and then we triple distill it in copper-rich column stills to produce two whiskies. Unlike a lot of other Canadian whiskies that have 30, 40, 50 different ingredients in it, Collingwood is made up of two whiskies and we make them both at our distillery. One is a lighter whisky, which is predominantly corn and malted barley; and then there’s the second whisky, which is what’s going to give it it’s flavors. It has higher rye content, and then there’s multi-barley and corn in it as well, as it was modeled after an American bourbon.

After we make those two whiskies, we’re going to age it for a minimum of three years in once used American oak barrels that we have made. We are the only company that owns its cooperage, so after we make our American whiskeys, because you can only use them once in the U.S., we repurpose them to Canada.

After that, we’re going to blend them together and then we use our unique toasted maplewood resting process. We would raise the liquid barrel, toast the inside and then we take it apart. The reason for this is maplewood is very porous. You get a lot of leakage in evaporation and through the sides, so we take it apart and we rest those pieces of wood or staves inside the liquid. The great thing about it being so porous is that it sucks up all the whiskey, and you’re going to get all of that flavor and all of that character and color out of it. After that, then we go to bottling and that’s how you make Collingwood.

TWW: Talk a little bit about the taste and appearance of Collingwood. What is it about it that makes it stand out?

Green: On the nose, people find it quite sweet. You’ll get those notes of vanilla, caramel, marzipan. You might also get some floral notes, like rose. You’ll also get citrus, but when you taste it on the pallet, it’s not as sweet. The general perception about Canadian whiskey is that it’s extremely sweet, whereas Collingwood is not.

On the palate, you’ll get more of the graham cracker, and you’ll get some of the toastiness. You will also get a little bit of a butterscotch or a toffee flavor, but it’s more of an essence than an actual sweetness. One of the greatest things about Collingwood is we wanted to create a whiskey without harshness and burn, so it’s super easy to drink and extremely velvety.

TWW: A few years back there was a variant of your whiskey released called Collingwood 21 Year Old, which is pretty impossible to get a hold of now. Can you talk a little bit about what happened with that and what was the history behind it?

Green: The distillery was built in 1967, and it was built by another company. Brown Forman bought it in 1971 and started distilling then, and when they did start distilling they decided that they wanted to try their hand at some other things such as a higher rye content in one of the whiskeys. What they did is they barreled it and they aged it for about four years and they decided to try it, and they weren’t really happy with the way it came out so they kind of put it aside and it got forgotten about.

When the distillery changed management and they went and did inventory, they found this 20 something year old liquid and somebody decided that they should probably try it. They opened it and it was just phenomenal, so they decided to do a special run just for the 21 year old.

Green: I was brought on to Brown Forman just a little over a year and a half ago and I was a territory sales manager in Montreal, which is where I live. I’m from Toronto but I live in Montreal. Being a Brand Ambassador was sort of my five year plan that ended up happening in one year, so it’s been a bit of a roller coaster.

I’ve worn many, many hats. I got into bars and started working there and really learned that I loved working in hospitality. I literally started off working the front door, selling tickets because I was 18 and you weren’t allowed to touch alcohol. Then I worked up to bartender, then I became the general manager of a bar when I was 21. I also, just before working for Brown Forman, was the national event planner for a cocktail competition that tours across Canada, so I was responsible for all seven cities with them. That’s actually how I was introduced to the Brown Forman team.

I have a background in advertising and marketing, I have a background in event planning, but I also have a background in mixology and sales. It gives me the insight into all of the aspects of this particular job because this job is multifaceted. When I speak to the media, I have to sort of put that hospitality hat on, but when I go out with the sales representatives, it helps that I understand numbers and how the market works.

TWW: How are you liking being a brand ambassador so far and what have been some of the challenges?

Green: I love being brand ambassador. One of the things that I loved about the event planner job, was that I got to travel to all of the cities. Then when I became a sales rep, it was a great job, but you have that travel bug and you have that itch and you want to go somewhere. I love it, I get to talk to people. I’ve never been the type of person who can sit behind a desk for 8, 9, 10 hours a day. I get to work with people, I get to work making cocktails and playing with flavors, so I get the best of all the worlds, marketing and the events.

Some of the challenges, I mean, goes with anything when you travel a lot. Not being home, sleeping in different places all the time, jet lag. For me those are small prices to pay for the job that I get to do every day.

TWW: How does it feel being the first ever brand ambassador for this brand?

Green: I think it’s amazing. I am very, very lucky because Brown Forman has basically said, make this brand your own. We want your input, we want to hear what you have to say, we want to see the things that you’ve learned, so I have a very unique opportunity where I have a say in our cocktail program and I have a say in the way we communicate our brand to people.