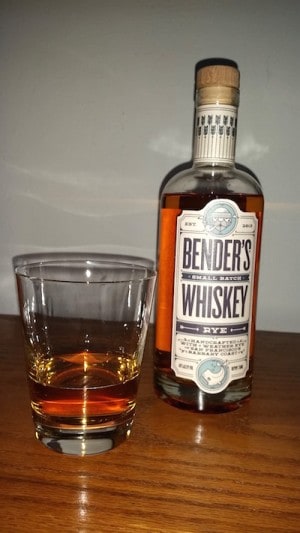 Bender’s Whiskey, batch #1, is a seven year old rye from north of the border.  Bender’s website makes no mistakes about stating that they were founded in 2013, and they are producing for this first go around this older rye.  Math experts and novices will notice that something doesn’t add up to this, but it is quickly explained that they sourced the rye from Canada and blend it on Treasure Island in the San Francisco, California area.

Bottled in small batch fashion, I happen to have bottle #158 of only 3248 from their first batch (they are on to a second one now).  The ornately detailed labeling is from the co-founder and name sake, artist Carl Bender.

With the help of Christopher Cohen, a 20 year veteran of the spirit industry, they have launched Bender’s rye whiskey after two years of blending experimentation to offer a quality product.

Here are the official notes below from Bender’s for this first batch, followed by my own tasting notes and final review.

It’s been said that nothing worthwhile is ever easy and we wouldn’t have it any other way. It took us fifty-two iterations to land on our opening take on a modern whiskey: a complex yet accessible, small batch Canadian Rye. Our first batch was sourced from an independently owned distillery just south of Calgary not far from where one of our founders was born. We worked with this distiller over the span of a year and half and were given access to the barrel room to blend various rye combinations. The final high proof whiskey was brought to Treasure Island, where it went through additional interations of blending and experimentation before being bottled and released.

Color – golden amber in both bottle and glass.

Finish – long spice, slight pepper heat, you can taste the high proof, but not in a bad way.

A slight deviation from normal rye, but a nice change from the big mellow ryes.  This has bite and character and is a nice change if you want a rye that lives up to the reputation of a spicy whiskey.