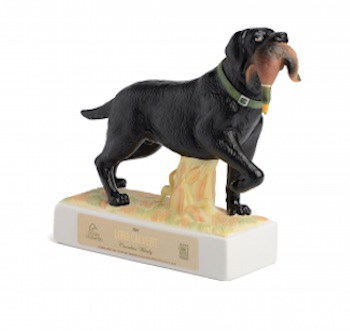 Lord Calvert Canadian whisky, imported by non-distilling producer Luxco, isn’t exactly a high end bottling at $13 on average at retail. Compared to two 20+ year Canadians we recently reviewed, it is about as low shelf as you can go. That doesn’t mean it can’t have purpose, though, as evidenced by a new partnership with Ducks Unlimited, the world’s leader in wetlands and waterfowl conservation, that has resulted in a special dog-shaped decanter release sold under the Lord Calvert label.

That’s right, a dog-shaped decanter filled with Lord Calvert whisky. At first glance, this thing screams 1970s Beam bourbon decanters. The 70s were a time in the era of whiskey history best forgotten from a liquor quality perspective, but as far as the containers themselves go, they continue to be enjoyed by a group of passionate collectors out there. As for the Luxco/Ducks Unlimited 2016 decanter, a portion of the proceeds from the sales will go towards supporting the non-profit’s causes, though how much exactly is not known.

Plans call for a limited number of these Ducks Unlimited whisky decanters – 4,500 to be exact, and each hand painted – to be available nationwide starting in October. The price point? About $100 each.

WOOF! What? Nearly a full C-note for each? That is a chunk of change indeed for a low-end Canadian whisky made from a mixture of rye, corn, wheat, and barley mash and aged for just 36 months. I suppose the fact part of the proceeds support charity takes the sting out of that, and also, as Luxco puts it, you get to live with the knowledge that each man’s best friend decanter was “hand filled with smooth and flavorful Lord Calvert Canadian Whisky.”

“We are excited to partner with Ducks Unlimited and we support their mission to conserve and restore America’s wetlands,” said Fletcher Buchman, brand manager at Luxco, in a prepared statement.