Sourced from Alberta Distillers Ltd., the so-called “honey barrels” for this release were hand-selected by late spirits luminary and third-generation distiller Robert J. Cooper. The rye whiskey is made from a rare mash bill of 100% rye grain in copper pot stills and joins the rest of the Lock, Stock & Barrel series, which debuted in 2013 with a 13-Year expression, followed by a 16-Year and then an 18-Year. 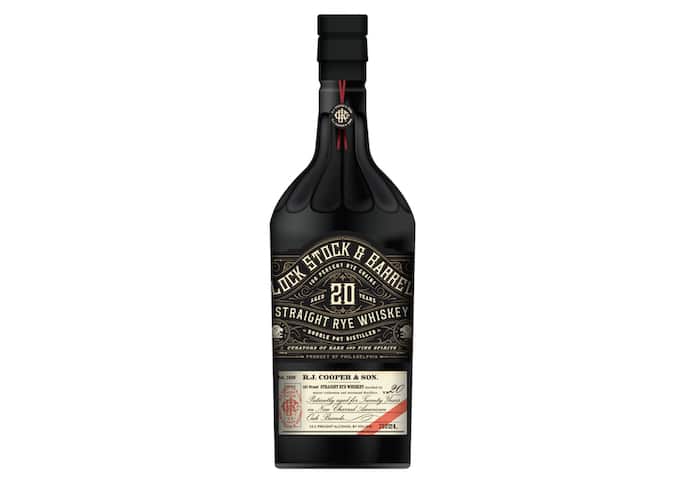 The spirit is showcased in an opaque black glass bottle, protecting the whiskey from light exposure. The company, knowing the the risk of this whiskey becoming over-oaked if aged too long, aimed to avoid this with aging techniques such as cold climate, 3.5 barrel-char and lack of toasting, allowing for what is described as a rich, balanced flavor featuring notes of warm spiced date cake, toffee, baking spice, dried apricot, cantaloupe and peppery rye spice.

“To say that Rob Cooper was a pioneer in the spirits industry is an understatement,” said Chad Solomon, Cooper Spirits’ Director of Trade Advocacy and Innovation, in a prepared statement. “Rye was only in the infancy stages of its revival when Rob began purchasing barrels, cultivating an incredible library built for long aging. His foresight has allowed us to continue producing premium spirits like the Lock, Stock & and Barrel line, and I’m proud to continue this legacy with the launch of the 20-Year.”

Lock, Stock & Barrel 20-Year is bottled at 112 proof and can be enjoyed neat, over a large ice cube or with a splash of spring water. Only 1,000 3-pack cases are available and can be found through specialty retailers at a suggested retail price of $389.