What do you think of when someone mentions Canadian whisky? Crown Royal usually comes to mind, as does Canadian Club. After that, Canada’s legacy distillers make up the rest: Hiram Walker’s bottles. Gruppo Campari-owned Forty Creek. Alberta Distillers, who supply the juice for Whistle Pig.

After that, few people I ask can list off any other Canadian whiskies.

But Canada has over 300 distilleries across the country, producing everything from Irish-style pot still whiskies to peaty single malts. So why doesn’t the world know more about Canadian whisky?

Primarily because the eight largest distilleries make 99% of the country’s whisky. Bottles from these massive distilleries (think Gooderham & Worts and Pike Creek) are fantastic—their winning streaks at top awards back me on this—but they only hint at the interesting whisky work going on North of the Border. 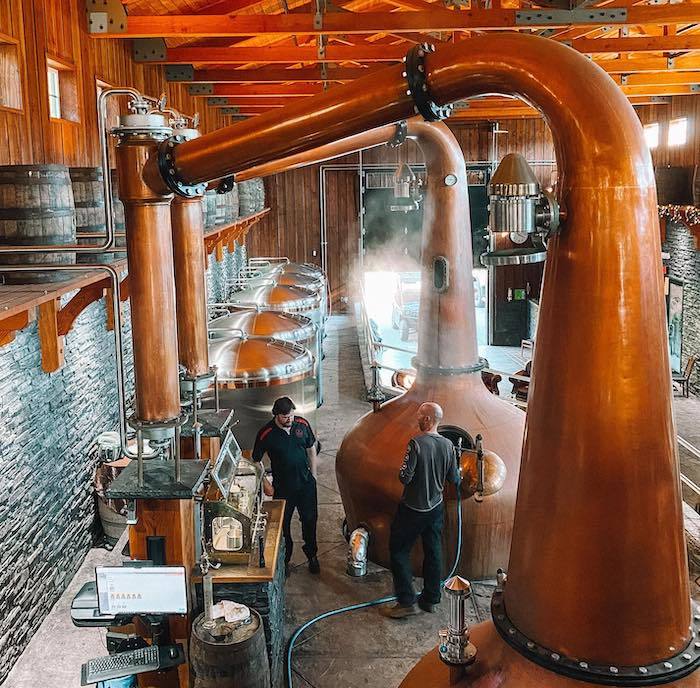 Canada’s landscape hints at how diverse the whisky scene can be. On the west coast, glacial rivers and towering mountains. In the center, millions of miles of flat land; ideal grain-growing territory. On the very eastern shores of the country, the crisp sea air gives the area a climate similar to Scandinavia or Scotland.

Devine Distillery and Winery in British Columbia is producing “alternative whiskies”: new-world spirits made with unusual grains. Their Ancient Grains whisky is made with spelt, emmer, Khorasan, and einkorn: all the ancestors of the grains used in whiskies made today. The whisky rests in American oak, with the barrels being used later to age genever.

Vancouver Island’s Sheringham also highlights heritage grains. Late this summer, they rolled out a grain-forward single malt made with whole-grain red fife wheat. (Red fife was the industry standard of wheat in 19th century Canada, and the oldest strain of grain in the country, brought over from Scotland in 1842. It almost disappeared a few years back, but the country’s bakers and whisky makers can be credited with resurrecting it.)

It’s the first whisky release from the distillery after laying down barrels in 2015. If their gin is any indication—they use hand-foraged kelp as a botanical for one, and yuzu and cherry blossom for the other—I’m expecting some really interesting drams coming out of those barrels.

Considering the number of single malts coming out of the country, combined with the fact that Vancouver is just seven degrees south of Scotland, you could suggest parallels between the Canadian and Scottish whisky scenes. And there certainly are Scottish roots here: the Scots have been emigrating to Canada for hundreds of years (My family came over in the late 1700s). Scottish Canadians are the third largest ethnic group in the country.

But distillers here are trying to shed their Scottish ties.

Instead of trying to make Scottish-style well, Scotch, Dubh Glas Distillery’s owner Grant Stevely is trying to make single malt influenced by Canadian terroir (with the help of consultant Mike Nicolson, who cut his teeth at a laundry list of Scotch distilleries: Cardhu, Aultmore, Caol Ila and Lagavulin). Under his direction they’re going experimental, using dark water found at the bottom of local lakes and aging in casks from local wineries (including the ice wine cask finish similar to what we’ve seen over at Glenfiddich).

On the topic of non-Scottish single malts, Fils du Roy out of the East Coast is crafting particularly wacky bottlings. Their New Ireland Whisky is aged for three years in oak, but proofed with beer fermented through the same process as the whisky. Lohin McKinnon is completely shrugging off single malt’s Scottish roots: they’ve turned out a cocoa single malts and heavily-peated ryes. Peated rye!

Shelter Point on Vancouver Island is playing into Canadian stereotypes with their master class-level, cask-strength, single-origin ryes (it took home top honors at the Canadian Whisky Awards this year). But they’re also on the single malt train, making different drams from exclusively 100% barley grown on the distillery’s 380-acre farm.

In their words, the temperate rainforest climate, proximity to the ocean play a crucial role in shaping their spirit. Location aside they pull their inspiration from everywhere: Scottish-style single malt, American barrels for aging. They even have some Irish-esque pot still whisky resting in barrels. Not to mention their Sunshine Liqueur, a barley spirit-based liqueur flavored with maple syrup. Canada, eh?

So it’s clear looking at these hot new distillers that there are the rumblings of something big in the Canadian whisky scene. And this is just the beginning. Many new distillers are waiting patiently for their first whisky releases to age.

Over in Ontario, I’ve been waiting for years for Willibald’s whisky to reach maturation. What they’ve produced in the meantime has been stellar: Wickedly good gin made from a blend of corn, rye, and malted barley then aged in oak barrels, giving off vanilla notes that pair perfectly with the caraway and coriander botanical base.

Hiram Walker’s Dr. Don Livermore noted to me once that “the envelope for Canadian whisky is constantly being pushed, but we’re struggling to tell people what’s going on here.” If these small distillers are any hint, Canada’s young micro distilling scene is growing into itself. They’re shedding off the stereotypes of watery blends and high-rye, getting creative with what Canada has to offer.

Kate Dingwall, a Canadian-based wine and spirits writer and sommelier, was born in Canada (eh), schooled in Georgia (y'all), and spent a large chunk of her adult life in Brooklyn. During the day she writes for Forbes.com, MAXIM, Elle, Liquor.com, Eater, Wine Enthusiast, VinePair, and The Bourbon Review. At night,...