The Hiram Walker distillery in Windsor, Ontario, Canada is a massive spirits making complex ultimately owned by Pernod Ricard. It is said to produce a good majority of the Canadian whisky out there, and includes in its mix of products either under Pernod Ricard or produced for someone else Wiser’s, Canadian Club and Lot No. 40, among others. The facility has long been closed to most public access, but now a new partnership is set to throw open the doors in a more consumer friendly, but still somewhat limited, fashion as part of a walking tour.

WindsorEats, a local food tourism outfit, and Corby Spirits (Pernod Ricard’s Canadian arm) have apparently struck an agreement for a revamped “Drinks of Walkerville” walking tour which includes visiting the distillery in groups of no larger then 16 at any one time. Starting at the beginning of April for the first time in 16 years visitors will get a tour of Walker, and be offered a guided tasting of four Canadian whiskeys inside the the J.P. Wiser’s Brand Centre: Wiser’s Deluxe, Lot 40, Gooderham & Worts, and Pike Creek. Additionally, a special fifth tasting will happen directly from a whiskey barrel. 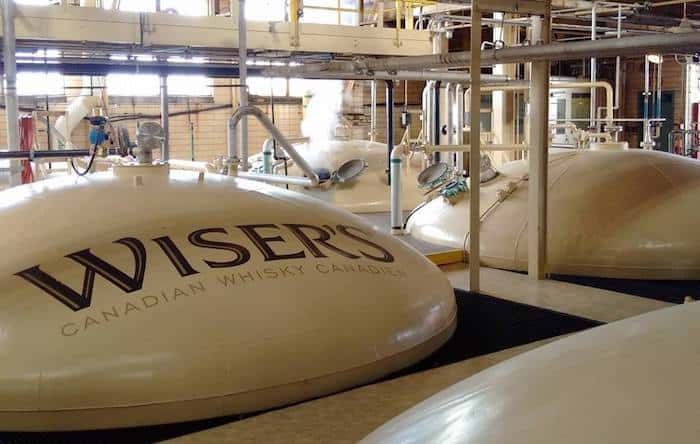 “Being able to visit the distillery will not only provide a new and unique experience on our existing tour, but also allows the chance to showcase the great culinary tourism offerings in Windsor,” said Adriano Ciotoli, co-owner of WindsorEats, in a prepared statement. “It gives an opportunity to passionate whisky lovers and those who are just curious at heart to get a hands-on look at how world class Canadian whisky is made.”

In addition to a visit to the distillery and tasting at the visitor’s center, other whiskey related aspects of this walking tour will include an engraved, commemorative Drinks of Walkerville bottle (750ml) of J.P. Wiser’s Deluxe Whisky; a stop to take photos in front of the “Whisky Palace”, the original Canadian Club headquarters, and a “stroll through Hiram Walker’s historic company town, Walkerville, to learn about the history, the architecture and the folklore associated with Whiskytown, Canada.”

To give you perspective on just how big Hiram Walker is, it is considered to be one of the the largest distilleries in North America. It boasts 37 fermenters, and the onsite “manufacturing process distills 180,000 litres of alcohol every 24 hours and operates 24 hours a day, five days a week to produce a variety of products including vodka, rum, and Canadian whisky. Fourteen maturing warehouses currently store 1.3 million barrels of spirits, which are blended and eventually bottled on four high-speed lines using one of the 50 available bottle molds.”