Mercer + Prince whisky is aged in American white oak barrels and influenced by Japanese Mizunara oak, and each bottle is presented in a two-cup bottle design.

“I’m so excited and grateful to finally introduce Mercer + Prince to the world,” A$AP Rocky said in a prepared statement. “I’ve wanted to launch a whisky for a few years, but it was difficult to find partners willing to innovate to the level I envisioned. Fortunately, I found those partners in Global Brand Equities and Gallo.” 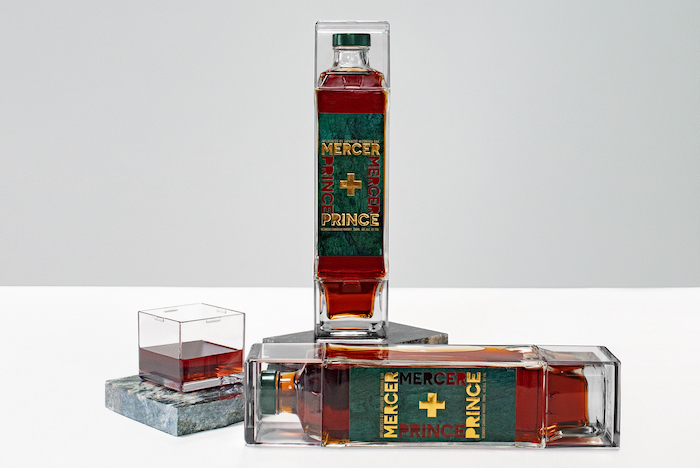 He said he’s been learning about whisky from all over the world for the past decade and wanted to “defy the rules to create something unique, while honoring and respecting industry traditions.”

“The bottle I designed is made to connect with the contemporary consumer. Mercer + Prince is smooth in taste, disruptive in packaging and close to my heart in name. It’s accessible to all and appeals to a diverse audience, which was very important to me.”

The Mercer + Prince name represents two cross streets in New York City where people from all walks of life with different backgrounds intersect and come together. Fashion and culture intersect here as well.

A$AP Rocky explained that his taste and style is reflected in the bottle design, a direct result of what’s described as a napkin-sketch-turned-reality.

He said that when sketching out what he wanted the bottle to look like, he wanted to create something that had a real functionality to it yet was also sleek and pushing the boundaries.

A$AP Rocky’s vision is the bottle that comes encased with two cups on either end, giving consumers the opportunity to immediately open the bottle and pour a drink for themselves and a friend. The so-called dfunctional design allows the bottle to sit vertically or horizontally on a bar or table.

“Rocky has been a friend and someone I have always shared a creative connection with, so when he wanted to create a whisky, it was a no-brainer for us to create this partnership,” said James Morrissey, founder and CEO of Global Brand Equities. “Rocky and I have always shared a vision to push the boundaries of innovation across genres and communicate with each other on the same frequency. Rocky is an intentional creator with a proven track-record to innovate and I knew he would have the inventiveness to build a consumer product that is sophisticated yet disruptive.”

Britt West, vice president and general manager of the spirit division at Gallo, said the spirit is distilled, aged more than four years in American white oak barrels, and blended in Canada.

“Bringing Rocky’s vision to life has been a terrific opportunity for Gallo and we appreciate his commitment,” West said. “It’s been an exciting process, helping him source the right whisky, finding partners capable of producing the package and ultimately getting it to the market effectively.”

Mercer + Prince will be available in retail later this summer at the suggested retail price of $29.99.

For more information, check out mercerandprince.com.

When people ask me for...
READ ARTICLE 
Bourbon / Lifestyle