With the new launch, Harris County Bourbon, the distillery looks to make an evolutionary step forward. 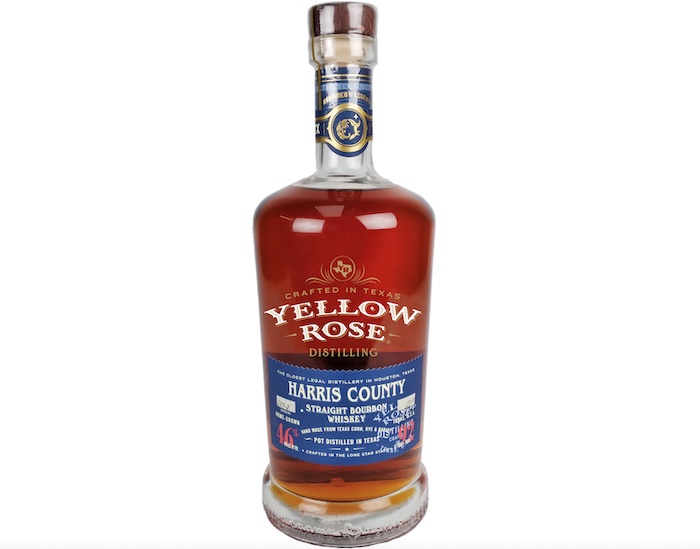 “While in the past, we had our gaze set as a single distiller toiled to create whiskey as quickly as possible, today we think in terms of how a talented core group of distillers will work together as we endeavor to create the ideal whiskey,” said Michael Langan, general manager of Yellow Rose Distillery, in a prepared statement.

In the Harris County Bourbon, he said, Yellow Rose selected Texas grown grains, settled on double-pot distilling, and went with a low entry proof to barrel.

“This allowed us to highlight our region as well as the expertise of our team, while paying homage to pre-prohibition techniques that we feel allow us to balance the maturation of this whiskey within our dynamic local climate.”

Despite its low entry proof, Langan said, they chose to bottle at 92 proof to maintain density of flavor and mouthfeel that was hard earned in their slow, double-pot distillation and 30 months in the Texas heat and humidity.

“While most high rye bourbons are typically described as having a spicy character, we wanted more than spice alone, it needed to have an underlying sweetness with the typical vanilla, caramel, coconut notes,” said Houston Farris, head distiller. “We’re using all Texas grown and malted grains. We have the power of the Southeast Texas climate during maturation.”

He said that on the nose, Harris County Bourbon has notes of brown sugar, cherry, fruit-wood smoke, toasted pecan, and tobacco. The taste is of brown sugar and cinnamon, with warm pecan pie paired with toasted coconut, black tea, and peanuts. It finishes with sweetness throughout, combined with a pop of cinnamon candy.

Yellow Rose Harris County is available in 750ml bottles and comes in at 92 proof, with a suggested retail price of $44.99 per bottle.

With the addition of the new bourbon to their line, and an increase in brand recognition, Langan said Yellow Rose Distillery has expanded. The visitor and experience center has seen a major refurbishment, featuring a new bar, lounge, presentation and tasting rooms as well as a new, 1,200-square-foot outdoor deck.

Langan explained that the idea for Yellow Rose Whiskey was born one night among friends more than a decade ago. He said the name Yellow Rose pays homage to a legendary character, Emily West, The Yellow Rose of Texas, known for her bravery and independent nature.