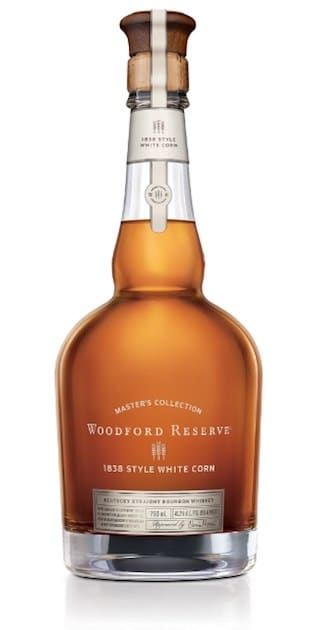 Woodford Reserve, as it always does around this time of year, has a new member of its Master’s Collection to unveil. This has been an ongoing tradition since 2006, when the collection of limited edition offerings began, and for 2015 the Kentucky distillery has turned to its roots as part of the makeup of the new 1838 Style White Corn bottling.

Woodford Reserve Master’s Collection 1838 Style White Corn, according to those behind it, was created by master distiller Chris Morris, who in turn took reference from old distillery production records for this bourbon. He developed and brought to life a recipe inspired by “past distillery industry leaders Oscar Pepper and James Crow and their original use of white corn in their whiskey production process from the late-1830s to the 1850s.”

Pepper and Crow, for those unfamiliar with them, were said by Woodford officials to have been “engaged in early distilling at the present day site of the Woodford Reserve Distillery.  While at this site, they engaged in innovation, experimentation, and discoveries that ultimately advance the bourbon and whiskey industries. The key bourbon production methods created and refined by Pepper and Crow have since been recognized by historians as advancing the modern bourbon industry.”

The use white corn, instead of traditional yellow corn, for this bourbon recipe is said to compliment additional grains within the liquid, including rye and malt, to create a sharper tasting whiskey. Expanded official tasting notes are below, and as for pricing and availability, expect Woodford Reserve Master’s Collection 1838 Style White Corn to be available in November in limited numbers for around $100 a bottle.

Aroma: Soft and nutty with a malty grain note sweetened with apple fruit, hints of spun sugar, cooked sugar and vanilla. Glimpses of cedar and clove spiciness through a delicate veil of oak smoke.

Flavor: Shortbread and a subtly cool lemon custard note are lightly spiced and dried with a dash of white pepper.