“We’re planning for the future as we see no signs that the bourbon boom is slowing down,” Morris said in a prepared statement. “More and more consumers worldwide are discovering one of the greatest exports from Kentucky … bourbon.” 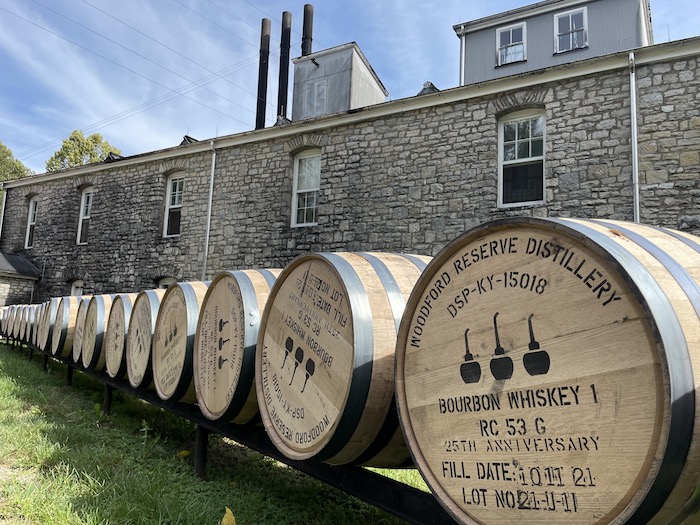 The new whiskey for Woodford’s 25th (image via Woodford Reserve)

Through the month of October, Woodford fans will be able to participate in special tastings, share in bespoke cocktails and find unique products for sale at the Woodford Reserve Gift Shop.

Earlier this year, Woodford Reserve announced the doubling of its capacity, increasing its three copper pot stills to six. A new building will house utilities and storage space, clearing the way for new fermenters in the current distillery building. Additional grain and barrel unloading areas as well as a training center for employees are also being planned.

To conserve the National Historic Landmark distillery, where many whiskey innovations occurred in the 1800s and 1900s, Woodford Reserve collaborated with historic preservation leaders in Frankfort and Washington so the design of its latest building will complement the older structures.

Woodford Reserve sits on what’s said to be Kentucky’s oldest distilling site where Elijah Pepper began crafting whiskey in 1812. Former CEO Owsley Brown II had a vision in the mid-1990s, to create a homeplace where guests could learn the history of bourbon while sipping on the world’s finest bourbon.

“The words of Owsley Brown II still hold true today,” MCall said. “Woodford Reserve is a labor of love for everyone involved. A love of this place, a love of history and a love of making superb whiskey.”

Brown-Forman renovated the historic distillery and, in 1996, opened it to the public for tours. The Woodford Reserve family of brands now includes five permanent expressions — bourbon, rye, double oaked, malt and wheat … along with their limited edition expressions, including the Master’s Collection and the very limited Double Double Oaked.