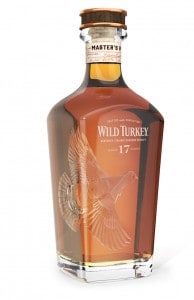 Wild Turkey bourbon has a very large following among American bourbon drinkers, there is no doubt. The typical bottling doesn’t usually hold top shelf liquor status, though, which is where the Kentucky distillery’s more limited edition releases come into play. We recently reviewed one, the Diamond Anniversary expression, and now we are proud to be among the first to bring you word of the upcoming Master’s Keep.

Wild Turkey Master’s Keep, according to information provided to us by the whiskey maker ahead of its release, comes in a beautiful bottle and will be available on a very limited basis for a price of around $150.

It is a 17 year old bourbon that, over the course of its nearly two decades old lifetime, traveled some 200 miles between both wood and stone warehouses during aging. The reason for this shuffling is well documented over at The Bourbon Review, but in essence it had to do with storage issues and strategies around how bourbon is warehoused.

I was also told by Wild Turkey representatives a little bit on how the barrels traveling between warehouses influenced the final product. Essentially, since part of the aging took place in stone warehouses, which are very cold, this made the whiskey age slower (than wood warehouses). The aging in the stone warehouses also attributed to the whiskey’s lighter cooler and lower proof.

What’s resulted in bottle comes from barrels hand selected by master distiller Eddie Russell, who is making this bourbon his debut whiskey after joining his legendary father Jimmy Russell at the helm of Wild Turkey this year. The duo, between the two of them, share some 95 years of combined distilling experience, and are said to be the only father-son master distiller pair in the industry.

In terms of taste profile, official notes for the 86.8 proof Wild Turkey Master’s Keep are below. Expect it to hit retail in August.