Why is Whiskey Brown? It’s Mostly (But Not Always) The Barrel

Why is whiskey brown? In general, whiskey is brown because it comes into contact with barrels. Alcohol is a solvent, so it leaches flavor and pigment compounds from the wood it’s aged in. The longer a whiskey spends in a barrel, the darker the color.

Notice I said “in general.” There’s also a big difference in color between whiskey categories due to the types of barrels used for aging, and whether or not caramel coloring is permitted as an additive. 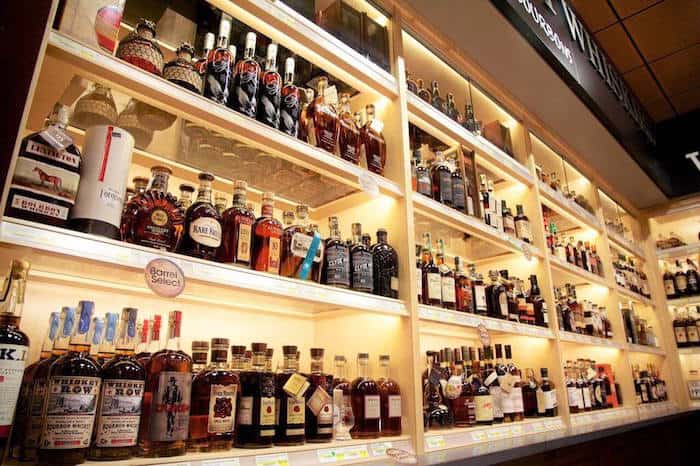 For the most part, barrels lose their coloring power over time. American bourbon, for instance, must be aged in new charred oak barrels, which almost immediately gives the whiskey a dark, almost mahogany color. Scotch whisky, on the other hand, is aged almost exclusively in previously used barrels, often used bourbon barrels. This is why scotch is often (although not always) quite a bit lighter in color than bourbon, even when it’s spent 12, 16, or even 20 years in the cask.

However, many categories also permit the use of caramel coloring (also called spirit caramel), an additive used to darken the whiskey without adding flavor.Caramel coloring is not allowed in bourbon or any American whiskey labeled “straight,” but it is permitted in other American whiskeys, Scotch whisky, and Canadian whisky.

Spirit caramel is not the kind of thing you’d want to pour over your ice cream. Although it’s made from sugar or corn syrup, it’s cooked so heavily that it’s bitter rather than sweet. That might sound like it would make the whiskey taste bad, but taste tests suggest that nobody can actually taste the difference between Scotch whisky that contains spirit caramel and the stuff sold au naturale.

Why do distillers add caramel coloring? There are two main reasons: because consumers associate darker color with higher quality, and to ensure color consistency between batches. Purists debate whether or not the practice should be encouraged, but for now, caramel coloring is commonplace.