To say that every other new whiskey hitting the market hails from New York State would not be an understatement. As mentioned in our previous coverage, state regulation in New York is known to be very friendly for micro-distilleries. Tuthilltown Spirits, makers of the Hudson whiskey line, first caught on to the friendly atmosphere for distilling in 2005 when it became the first whiskey distillery since Prohibition to open in New York.

Since then, the proverbial floodgates opened, and countless distilleries (many of which make whiskey) have popped up. This NearSay article from 2015 pegged the number of craft distillers in New York at 65. With all that in mind, our coverage of the New York distilleries and products seems to be growing almost as fast as the number of distilleries.

Among the 65 and undoubtedly growing New York distilleries, Adirondack Distilling Company started in 2011 with vodka. Recently, Adirondack released 601 Bourbon which pays homage to the address of their distillery (601 Varick Street, Utica, New York). As with many craft distillers, Adirondack uses only local ingredients. 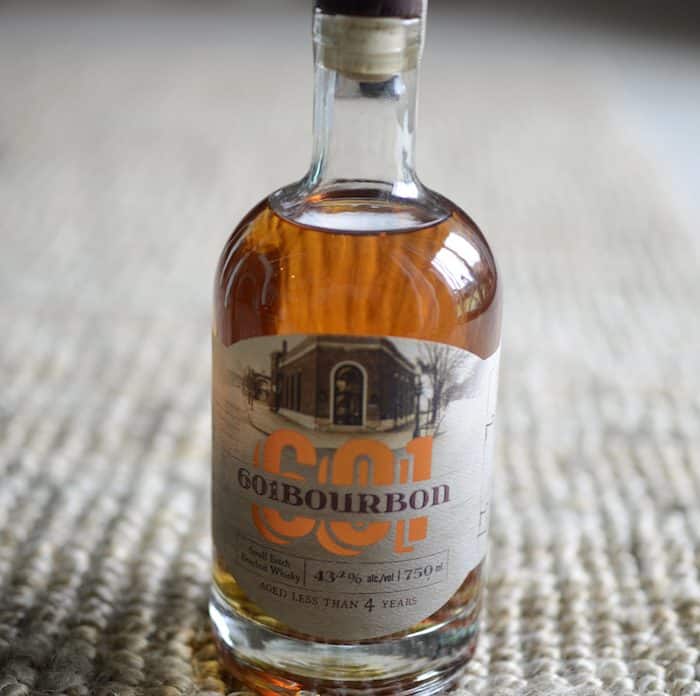 Vital Stats: 601 Bourbon clocks in at 86.4 proof and lacks an age statement, simply stating “aged less than 4 years” on the bottle. Interestingly, the mash bill for this bourbon includes only one ingredient: corn (Adirondack also makes their vodka and gin using only corn). Notably, the subject of this review is from batch number two.

Appearance: In a glass, 601 Bourbon appears light honey brown, indicative of a young whiskey bottled at a relatively low proof. In addition, it seems that Adirondack does not chill-filter 601 Bourbon, as some light sediment (possibly fatty acids) is visible in the whiskey.

Nose: On the nose, 601 bourbon includes light notes of sweet corn and vanilla that give way to faint hints of pecan. Overall, this bourbon emits a very light aroma.

In the craft whiskey category, Adirondack’s 601 Bourbon falls right in the middle of the pack. The flavor profile for this bourbon is completely acceptable but pretty one-dimensional.

Furthermore, the flavor profile seems well-suited to spending additional time in the barrel, so older offerings of this bourbon would be of interest.