Today, on Whiskey with Wes, let’s talk about a very old, classic, super cool drink for all you serious whiskey lovers out there. This Blue Blazer Hot Toddy has it all: scotch, rum, bonded bourbon, and most important of all, fire! You’ve probably muddled some fruit and sugar, maybe done some fancy shaking and pouring, maybe even sabered a Champagne bottle, but I would bet good money you still haven’t poured liquid flame!

Well, after following along with this week’s video you can add that to your list of accomplishments. 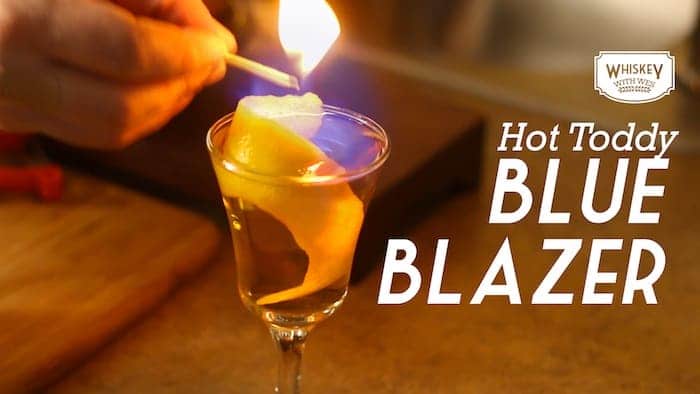 The Blue Blazer was first featured in the Jerry Thomas’ 1862 cocktail book “How To Mix Drinks: Or, The Bon Vivant’s Companion,” and as far as we know, Jerry Thomas invented the drink.  In fact, the most well known image of Jerry shows him “throwing” his Blue Blazer back and forth, rolling it from one mug to another to caramelize all those delicious sugars!

A by-the-book Blue Blazer calls for cask-strength Scotch, but I believe in taking cocktails to the next level. Here, I’ve elevated the drink with the addition of my good friend bonded bourbon and a pretty funky navy-strength rum. You are going to need some special equipment for this one: two mugs for pouring and mixing the cocktail and, of course, something with which to set it ablaze.  Be careful, this one is pretty fiery – don’t say I didn’t warn you!

Best of luck (and enjoy)!