Editor’s Note: Whisk(e)y Wednesday is a weekly feature in which we focus a spotlight on one of the myriad of whiskeys we’ve reviewed over the years. It should be noted that by clicking the buy link below our site receives a small referral payment which helps to support, but not influence, our editorial and other costs.

The story of Jefferson’s Ocean Bourbon is the story of an interesting attempt to take a popular bourbon brand in new directions. It started when brand co-founder Trey Zoeller aged three barrels of Jefferson’s bourbon on M.V. Ocean for four years while the crew traveled the Pacific Ocean tagging sharks for research. It was found during this experiment that temperature fluctuations, salt water air exposure, and constant motion of the ship created a unique flavor profile for the bourbon.

Following this experiment and its initial release, the Ocean bottling has now taken off, with what’s now hundreds of barrels having been sent around the world and seeing over 25 ports, 5 continents and 2 equator crossings on average. To date there have been over 25 “Voyages,” as each release is called, with some of these offering variants on the modeling mentioned previously. 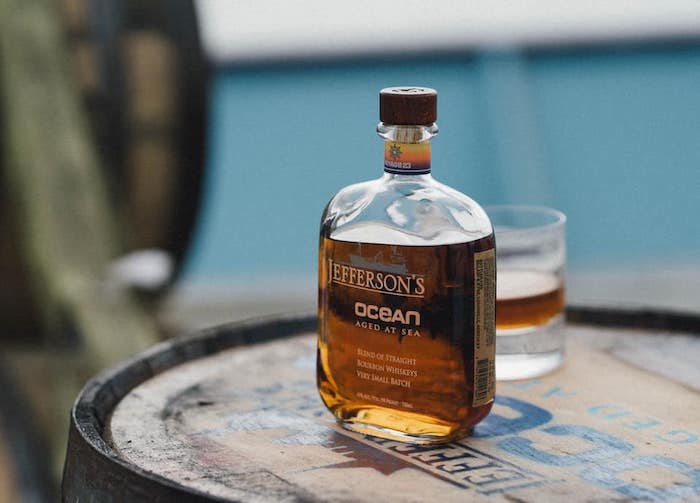 From The Brand: Fully aged bourbon that is hyper-aged at Sea on ships that cross the Equator up to 4 times, visit 5 Continents, and anchor at over 25 ports on an average sailing.

Our Thoughts On It: Overall, the process behind Jefferson’s Ocean certainly makes this a unique product. However, whether the process creates a different flavor profile is up for debate. At best, I think the sea aging process adds a touch of salt and smoke complexity that usually doesn’t appear in bourbon, but those notes are very subdued.

A Cocktail To Try It In (recipe from the brand):

Jefferson’s Ocean on the Rocks

The Whiskey Wash Deals are e-commerce deals the website staff comes across during online research. These items are not editorially reviewed by us, but instead come across to us at first glance as possible useful items for the whiskey lifestyle. It should also be noted that by clicking the buy...

More by The Whiskey Wash Deals