Editor’s Note: This whiskey was provided to us as a review sample by Wolf Moon Straight Bourbon. This in no way, per our editorial policies, influenced the final outcome of this review. It should also be noted that by clicking the buy link towards the bottom of this review our site receives a small referral payment which helps to support, but not influence, our editorial and other costs.

Country singer Jason Aldean, in a 2018 duet with Miranda Lambert, took a little bit of a swipe at the Jack Daniels Distillery: “I don’t wanna be the one to tell ’em… that stuff that they’ve been selling… ain’t working like it should.”

Now Aldean has his own stuff that he’s selling, in a joint venture with country band Florida Georgia Line. Their Wolf Moon Straight Bourbon is a four-year-old whiskey sourced from an Indiana distillery – almost certainly MGP Ingredients – and aimed squarely at the “another round of shots on the bar” crowd. It sells for about $25 a bottle, which means pours should be affordable at most bars.

“Jason Aldean and Florida Georgia Line go way back,” according to press materials for Wolf Moon. “They’ve written hit songs together, toured the world together and shared many glasses of whiskey along the way.” Fans will no doubt appreciate that Wolf Moon is intended as a tribute to those good times and a celebration of the ones yet to come.

As with all celebrity brands, the real question is whether the whiskey will be interesting to anyone beyond the fan base.

A wolf moon is traditionally a January full moon – when, theoretically, wintertime food is most scarce and hungry wolves are prone to howling. I’m sure there’s an analogy I could draw from the January moon to the whiskey, but it isn’t likely to be worth it. A marketing manager somewhere dreamed up the name to put on a relatively straightforward celebrity-branded sourced bourbon.

Don’t get me wrong; that’s not necessarily a bad thing. Affordable, straightforward, 80-proof whiskey will always have a place at the backyard BBQ or weekend at the lake with friends. The fact that it’s not particularly complicated and has a low alcohol content makes it approachable and friendly for pretty much anybody in just about any circumstance.

Aldean sang about Jack Daniels back in 2018, and his Wolf Moon Bourbon will probably be sitting near JD on the shelves at many liquor stores in 2021 – competing for the same segment of customers, more or less. 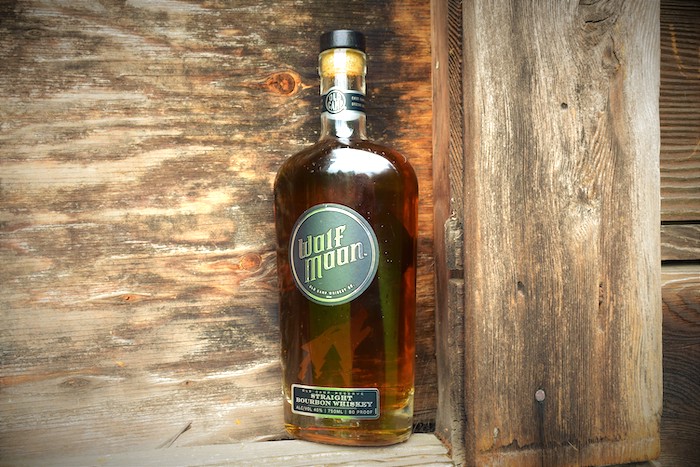 Appearance: Burnt orange, watery legs on the side of the glass.

Palate: A little spiciness up front, which makes me think this is one of the MGP mash bills that includes rye. It fades fast and there’s not much going on in the mid-palate, but the finish offers a splash of gingery chai tea.

Because we have a Wolf Moon vs Jack Daniels theme going, I ended up doing a side-by-side comparison of the two at my home bar. It had been a few months since I drank Old No. 7, and it was better than I remembered. Even so, I’d have to give Wolf Moon the edge. The whiskey just goes down a little more easily, and the traditional bourbon flavors are a little more pronounced. All things considered, this is a perfectly respectable party-time whiskey from Aldean and Florida Georgia Line.