With all that in mind, the subject of this review, Willett Pot Still Reserve bourbon started life as a single barrel expression of other distiller’s bourbon. For recent releases, the single barrel expression has been dropped in favor of small batch. In addition, while it seems likely that Willett’s own bourbon will eventually make its way into their namesake brand, current bottles likely still include sourced bourbon. 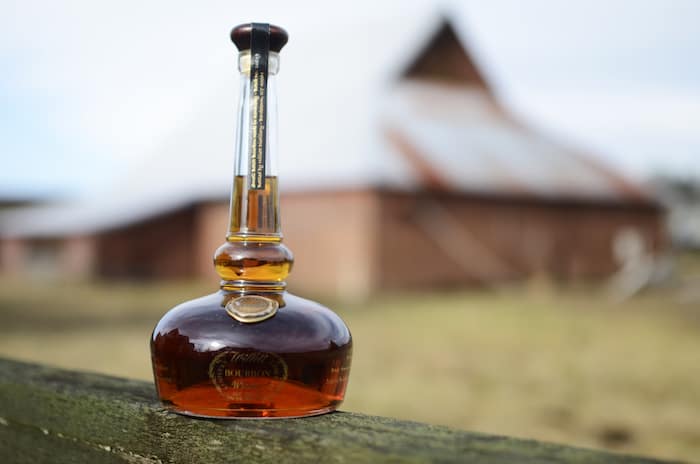 While the bourbon in the bottle generally meets expectations, the defining feature for this particular bourbon lies in the packaging. The pot still shaped bottle for this bourbon will certainly jump out on a shelf. Other nice design elements, such as a golden wax seal on the shoulder of the bottle and golden script font for the label, make Willett Pot Still Reserve one of the more well designed bottles currently available.

However, looks will only get you so far in life. Thankfully, Willett Pot Still Reserve Bourbon has some nice qualities on the inside of the bottle as well, so let’s get to the important task of drinking the bourbon.

Vital Stats: Willett Pot Still Reserve comes without an age-statement at 94 proof. As mentioned above, Willett now releases this bourbon as a small batch offering. While Willett’s own distillate will undoubtedly make its way into various Willett Brands in the future, current bottles probably include sourced bourbon from other Kentucky distillers. Retail price for a 750 mL bottle of Willett Pot Still Reserve varies widely – in some areas this bottle retails for under $40, while in others the price approaches $60.

Nose: Sweeter notes of corn and caramelized sugar lead the way on the nose, while lighter notes of cedar and pecan linger underneath.

Palate: The palate for Willett Pot Still Reserve bourbon starts with notes of citrus, caramel, and pepper. In the mid-palate, the citrus notes subside, and the caramel and pepper notes blend with a hint of dry oak. The medium duration finish includes lighter hints of the citrus, pepper, caramel, and oak that turn a bit dry at the end.

Willett Pot Still Reserve bourbon is well-executed small batch bourbon. Compared to other bourbons in this price range, I think it compares well with bourbons from other large Kentucky distilleries (perhaps because the bourbon in Willett Pot Still Reserve was sourced from some of those distilleries). At 94 proof, this bourbon will not be drowned out in many mixed drinks, but would I prefer something a bit higher proof.

With the distinctive packaging, this bourbon also makes a great gift for just about any bourbon drinker. Overall, Willett Pot Still Reserve will not disappoint, but it also doesn’t have any wow-factor that sets it apart from the pack. So, if the flavor profile seems to be in your wheelhouse, and you find it at the right price, this is certainly worth a try.