Philip Sullivan, one of the owners of Wildrye Distilling in Bozeman, Montana, pushes their company towards a singular goal: “To make a new unique product using almost entirely local ingredients.”

What would be a reasonable goal for most other food/drink industries becomes complicated by the fact Montana is not a historically a hub for whiskey production. This has changed a bit in recent years, as craft distilleries have popped up around the state. Be that as it may, many whiskey drinkers are used to drinking whiskeys with ingredients (barley corn and rye) sourced from Kentucky, Tennessee, and the Midwest. This presents a unique challenge for the distillery. Their Wildrye Distilling Five Drops Bourbon is a case study in the possibility of making a truly locally sourced Montana whiskey that also tastes great.

The “Five Drops” in the name comes from a slice of Montana’s history. In 1900, a Garnet Mining News story touted “Five Drops tinctures” as “The Pleasantest Most Powerful and Effective Never-Failing Tonic.” It is this merging of old-timey aesthetics with modern whiskey production techniques that sets this bottle out from the pack. While age doesn’t necessarily equate to quality, the fact they are able to make such quality whiskey in such a short time (11 months) bodes well for their future in the industry. 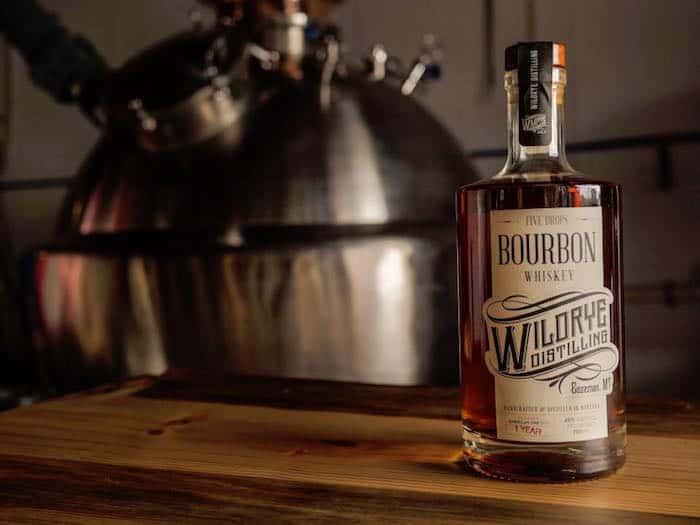 Appearance: The brew has a medium chestnut color in a mildly stout, cylindrical bottle that merges modern aesthetics with an antique feel.

Nose: The nose is best described as “wood cabin on the coast.” The aroma evokes a pleasant, nostalgic feeling of being in a woodshe,  mixed with chocolaty notes and a hint of briny ocean spray at the end.

Palate: Much like the nose, the taste is very wood-forward and oaky. Unlike the nose, the sweeter flavors of the corn come out in the palate. The interaction between the barley and the casks creates a bourbon with an almost Scotch-like flavor palate.

5 Drops Bourbon embodies the best of what local craft distilling has to offer. This bottle is a key example of happens when savvy business decisions meet customer demand. It’s a great pick for those interested in understanding what’s going on in the Montana whiskey scene, and a unique opportunity to try an excellent whiskey made with unique locally sourced ingredients.