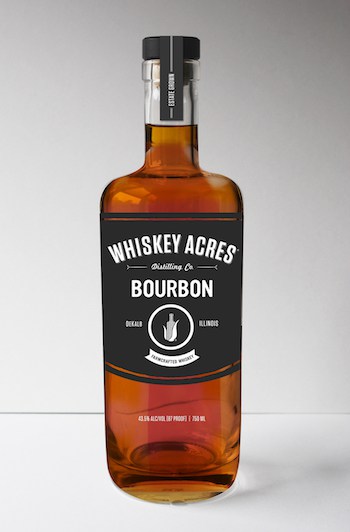 Given their location in the heart of corn country, it seems only fitting that Whiskey Acres Distilling in DeKalb, Illinois, puts their focus squarely on their grain. The passion project of three longtime farmers, the distillery is a true farm-to-glass operation, using only grains grown onsite—with corn as the focal point.

Jim and Jamie Walter, a father-son team, and their partner Nick Nagele, are farmers first and distillers second. Dave Pickerell, the former Maker’s Mark master distiller who now heads up WhistlePig and Hillrock Estate and was hired as a consultant by the trio, calls them “the most sophisticated farmers” he’s worked with, commending the detail with which they monitor every aspect of a crop’s growing conditions. That level of monitoring, along with their deep knowledge of grain varieties, means they have substantial control over a whiskey’s terroir, not usually a factor that comes up in conversation around spirits.

Whiskey Acres, like so many young craft distilleries, got their start selling unaged corn whiskey, as well as corn vodka. They also have a rye whiskey and some expressions made with heirloom corn varieties in the works. Their bourbon, which includes wheat—though they don’t specify proportions—was released earlier this summer. It’s bottled at 87 proof. No age statement is given.

Nose: Bright corn, hay, and raw sugarcane are predominant, along with honey and a dash of allspice. I get a tiny bit of dark fruit, as well. The distillery, in their tasting notes, mentions cornbread, which I could see, but my impression is more of fresh, vegetal corn than cornmeal.

Palate: A little sweeter and heavier than the nose, with brown sugar and cinnamon alongside a somewhat grainier corn note, orange, cinnamon, and light oak. I can almost taste carrot cake in the crisp corn alongside the sweet sugar and spice notes.

Perhaps unsurprisingly, this is a very corn-forward bourbon, which I find to be a nice change of pace—and it fits the distillery’s logo, besides. The juxtaposition of bright, crisp vegetal notes with sticky-sweet baking spice and brown sugar is a surprisingly effective one. At $45 a bottle, it’s relatively affordable for a truly farm-to-glass expression, and definitely leaves a unique impression.

FINAL SCORE: 89/100 [SHOP FOR A BOTTLE OF WHISKEY ACRES BOURBON]

Shares
2.5k
Views
Share on FacebookShare on TwitterGet Our Newsletter
Cheers to the Dads! Personalize a bottle of his favorite whiskey to create a modern gift for the modern man. Use code: FATHERSDAY20 for $20 off your next order of $100 or more at ReserveBar