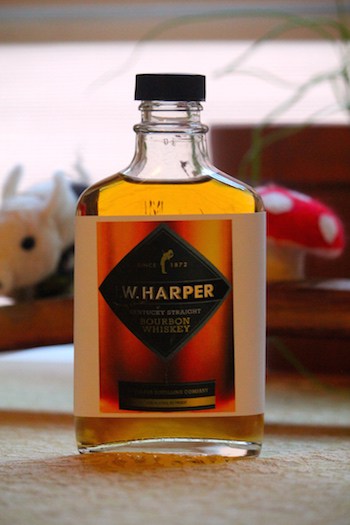 After a two decade long hiatus on US production, American born I.W. Harper Bourbon Whiskey is once again available stateside as of this spring. Pushed out of the American whiskey market approximately 20 years ago, I.W. Harper is now itself pushing hard for a comeback. The brainchild of international spirits behemoth Diageo (apparently scrapping hard for a foothold in the American whiskey movement, as is evident with their multiple bottling releases over the last year or so), this bourbon is back to claim its place in the colorful montage of American craft whiskies—or at least make a valiant effort doing so.

We got a chance to recently attend an unveiling of the Harper bourbon here in Portland, Oregon, where The Whiskey Wash is headquartered. There we learned about both the 4 year old bourbon, which we check out in this review, as well as the 15 year old limited edition expression in the retro style bottle design. As we noted at that time this bourbon is no longer a bottom shelf spirit, but how does it hold up taste wise in its return to its country of origin?

I.W. Harper is, in many ways, what it claims to be—good old fashioned American bourbon. It barely strays from the expected bourbon set of expectations. In the glass, for example, caramel hues define the spirit.

On the nose, meanwhile, hay and raw wood come through clearly. There is a light, bright quality to the first sniff of the dram. After such a pleasant, pastoral nose, the first sip proves underwhelming. Raw wood follows through from the nose to the palate, followed by obvious vanilla and a simplistic wood-chippy quality.

With the finish, there’s not a particularly lasting expression on the palate before it quickly fades into oblivion.

I.W. Harper, I found for the most part, was a disappointment compared to its potential. Absolutely adequate in so many ways, the dram was one I would happily glug on any given night, but not one I would actively search out any day. I struggled to find defining characteristics in this whiskey, apart from stereotypical bourbon notes present only because of their mash bill requirement.

Satisfactory, and certainly not offensive, I.W. Harper merits a solid 80 in my book.