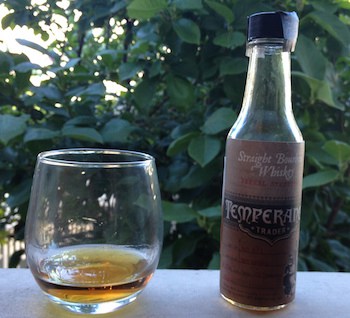 Many whiskies today, much like cheap beer, can tend to be all marketing. Just as there’s no real difference between Hamm’s and Old German, except that cartoon characters in lederhosen appeal to some people more than others, a good number of so-called craft distilleries are often caught up in bottling spirits bought from an industrial-scale distiller as (1) they wait for their own maturing spirit to be ready for bottling or (2) just put whiskey into a bottle and sell it straight out.

Portland’s Bull Run Distillery, named after the watershed that provides the city’s exceptionally pure drinking water, is one such operation that falls into the first category. Though a so-called Oregon whiskey made with malted barley is in the works for 2016, for the time being they’re selling a lot of sourced bourbon and American whiskey under the brand Temperance Trader.

Their website boasts that the barrel-strength version of the Temperance Trader bourbon, which retails for around $40, was “…born in the Northwest Territory,” which, for those who didn’t pay attention in US history class, refers to the upper Midwest, not the Pacific Northwest: specifically Indiana, according to the bottle. In any case, it has a mash bill of 65% corn, 25% rye, 10% malted barley and is aged a minimum of four years.

As for ABV, my sample clocked in at 117 proof, but what’s on the shelf can vary by batch (the distillery says, on average, its 115 proof).

Nose: This whiskey comes in hot, as is to be expected with a barrel-strength spirit. After the initial burn, spicy cinnamon, presumably an artifact of the high rye content, comes through, as do orange and a touch of honey.

Taste: The spiciness prevalent in the nose lingers upon taking a sip, but sweeter notes are more apparent. Some buttery oak can be detected, but the high alcohol content muddies the whiskey’s complexity.

Finish: The finish is fiery hot and medium-length. Leather and a light smokiness appear on the palate.

As this was cask strength, I also decided to try it cut with local “Bull Run” tap water:

Finish: The addition of water tones the fiercely hot finish down considerably, letting distinct flavors pop out more clearly. The palate is similar to the neat version, but more balanced. Oak lingers a little longer through the finish.

All in all, despite my misgivings about its branding, this is a fairly good whiskey; it’s a reminder that companies like MGP started selling spirits wholesale because they make a pretty decent product. Personally, I don’t see what’s gained by leaving this bourbon at cask strength. To the detriment of its rather approachable palate, the neat version is dominated by alcohol, and flavors that were muddy and indistinct on the first tasting balanced out cleanly when cut with a little water.

I give the Temperance Trader Barrel Strength Bourbon a score of 83.