Editor’s Note: This whiskey was provided to us as a review sample by Still Austin Whiskey Co. This in no way, per our editorial policies, influenced the final outcome of this review. It should also be noted that by clicking the buy link towards the bottom of this review our site receives a small referral payment which helps to support, but not influence, our editorial and other costs.

Founded in 2015, Still Austin Whiskey Co. was the first whiskey maker to set up shop inside the Texas capital’s city limits since Prohibition – though its distinctiveness doesn’t stop there. It’s also a rare craft distiller that never sourced whiskey to get started, embraces a grain-to-glass ethos (using only locally sourced grains) and champions an unusual and labor intensive “slow-water reduction” aging process for its flagship whiskies.

That doesn’t even get us to the 42-foot-tall custom-made column still it employs, or the fact that the distillery is designed with energy efficiency and water conversation as primary considerations. Whatever it’s doing is working: Sales are up 584% in the last 12 months, and the distillery is in the process of an expansion that will double production capacity later this year.

The Whiskey Wash reviewed the Still Austin Straight Bourbon last September, and gave it high marks. This time, we’re spending some quality time with the Cask Strength Straight Bourbon – which clocks in at 118 proof, up from the 98.4 proof of the regular production run.

Still Austin works closely with Nancy Fraley, who is research director at the American Distilling Institute and runs a consulting company (Nosing Services) in Berkeley, Calif. The distillery sends her hundreds of samples each quarter, and she ranks and rates every barrel based on how it’s progressing. She recommends which barrels should be blended together as part of the flagship releases and which should be set aside to be bottled at Cask Strength, for example.

The flagship bourbon is combined into 10-barrel blends that, over their final six months before bottling, are slowly proofed down – as opposed to adding water once at the end of the process, which is typical in the industry. The theory is that the reduction process gives the added water time to interact longer with the compounds in the wood before bottling, creating a more complex final product.

The Cask Strength bourbon doesn’t go through that process. It comes from barrels Fraley recommended to be bottled as they were, at full strength.

Still Austin refers to its flagship bourbon as “The Musician,” reflecting the label painted by Austin artist Marc Burckhardt. The Cask Strength release uses the same painting, but puts it against a moodier, night-sky background.

Future Still Austin releases will feature other paintings intended to capture the spirit of Austin, says Chief Operating Officer Brandon Joldersma. Not current or historic individuals, but rather composites meant to evoke the city and its creativity.

“We’re trying to make labels that are unique in the bourbon industry,” Joldersma says, “just like we’re trying to do something that’s unique with our whiskeys overall.” 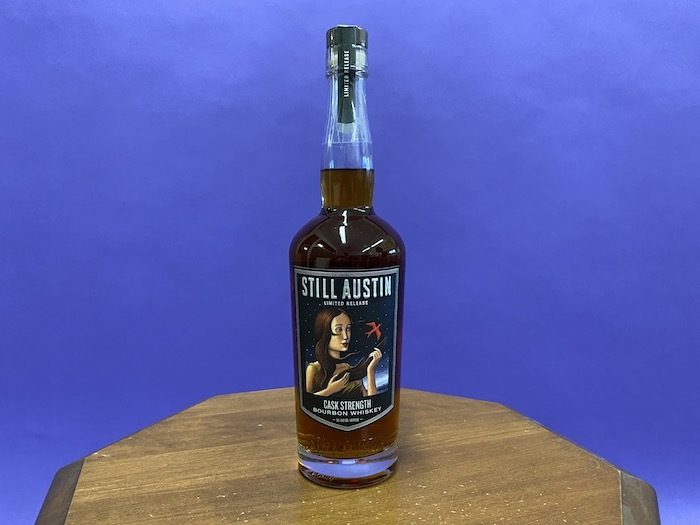 Appearance: Medium burnt caramel color; darker than you would typically expect for a two- to three-year-old bourbon.

Nose: The rye spiciness is evident immediately. Behind that, though, is maple syrup, vanilla and caramel. With Still Austin’s flagship bourbon, you get butter cream. The nose on the Cask Strength is significantly more pronounced, and spicier.

Palate: Brown sugar, cinnamon, black pepper and raisins, with a pleasantly short finish. Far more balanced and easy-going than you expect with 118 proof, and for such a young bourbon. Where the flagship bourbon tends toward sweetness, the Cask Strength leans more into the high-rye flavor profile.

Still Austin is a young distillery, and this is a young whiskey. You wouldn’t necessarily know either fact by tasting this juice, however. In terms of price point, the whiskey is on par with another I keep on my bar: Four Roses Small Batch Select. It’s a little spicier than the Four Roses, but wouldn’t be out of place in the same conversation. That should give you an indication of its quality, and gives me a sense of optimism about where this young distillery might be headed.

Joldersma says Still Austin will be releasing a 100% rye flagship whiskey starting early next year, and it has “a lot of fun stuff laid down” for limited releases, as well. A Jimmy Red Corn bourbon and an ultra-high-rye Blue corn bourbon, for example, along with a new series called Distillery Reserve – “one or two barrels of random stuff” available only at the distillery.

Based on my limited sample so far, I’d characterize Still Austin as a craft distiller on the rise. Keep an eye out for them in the years ahead.