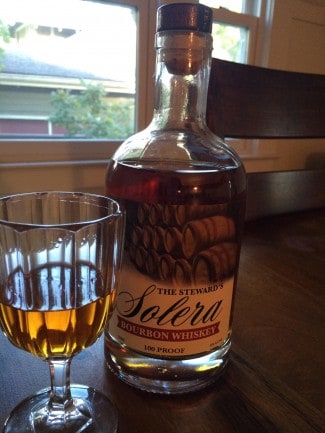 While cooking, it’s tempting to mess with a recipe to make it your own. But when do too many ingredients catapult a recipe from tasty to jumbled? And does the same thing happen when creating a whiskey? Is it complex and interesting? Or a tragic loss of nuance?

This question was on my mind when trying Colorado-based Steward’s Solera. This bottle introduced me to the solera: Reminiscent of a cheerleader pyramid of barrels, a solera is a blending system used to combine whiskey of various ages. Solera means “on the ground” in Spanish, and it refers to the lowest level of barrels, where the liquid is oldest. By blending fractions of new product with old, the finished product is a mixture of ages. It’s an ongoing process.

The bourbon comes from a veritable logic puzzle of places, which we shared about a year ago while pondering how this mad scientist blend would turn out.

According to Steward’s Solera’s website, the bourbon comes from “8 distinct bourbons from 4 states. From Kentucky barrels put down in 2000, 2001, and 2004. From Indiana we use barrels put down in 2000. Then we use barrels of Tennessee bourbon put in cask in 2007. These are all traditional mash bills using dent corn and are from 60-75% corn with 5% barley and the remainder rye. To this we add 3 distinct Colorado bourbons created at Woody Creek Distillers. The first bourbon with a blend of dent corn, what and rye from Colorado and also a bourbon using sweet corn from the Olathe region also in Colorado. The final bourbon created in Colorado used Bloody Butcher corn grown in Connecticut.”

All this was giving me a headache—and I hadn’t even touched the stuff yet.

After all this over-explaining, I was curious how it would taste. Might it be a murky soup? Or would it instead rise above the kitchen sink of its parts?

The color is pretty, and a bit light—like amber that’s lit from behind. Its nose is floral and cherry wood, with a bit of vanilla. It smells slightly sugary. On first sip it’s smooth, and easy-drinking. The slight sweetness on the nose carries over, but it’s not cloying—instead, rather light. Its finish isn’t long, though it does burn a little at the end. Its subtle sweetness could make it at home in an old fashioned.

A bottle will run you around $50. Bonus: You can also feel good about your purchase: Steward’s Solera has created a concept in which the first 10% of profits go to charity.

Aged eight years and at 100 proof, it’s smoother and cleaner than I’d expected. For its ease and surprisingly unmuddled taste, I give it an 81.