Editor’s Note: This whiskey was provided to us as a review sample by Buffalo Trace. This in no way, per our editorial policies, influenced the final outcome of this review.

We all know Buffalo Trace. Even if you don’t know Buffalo Trace, you’ve had something from Buffalo Trace. The goliath of a distillery produces many labels, and many of those labels are loved by many and sold in the many thousands of cases. They have a rich distillation history and continue to push the envelope of creativity in the whiskey world while carrying some of the most traditional names and styles in their lineup.

Stagg Jr. is another heavily followed, limited release bourbon from the Buffalo Trace Distillery. Most descriptions label it as a brand that finally learned to stand on its on after a few falls. Around version three is when most people really started to enjoy it, and it is now a more accessible version of George T. Stagg, at least in some ways. Stagg Jr. carries more oak and many say has a closer profile to Buffalo Trace Bourbon than George T. Stagg… I don’t necessarily disagree. Side by side, Stagg Jr. is definitely a deeper darker bourbon in flavor, while George T. Stagg is a bit fruitier and more complex.

There are usually two releases a year, and they tend to sell out pretty quickly. The price point fluctuates a lot depending on where you’re purchasing. In Oregon, a control state, it’s a mere $50. However, secondary markets see it hitting $200 easily. One of the most talked about features is the high ABV, this time reaching 128.4 proof.

With that high proof, these barrels must be coming from higher areas of the rickhouse. I’m curious which rickhouses they use, as this is a really fun talking point when we’re looking at Buffalo Trace. They’ve got a good number of them, and are adding 30 more that each hold 58,000 barrels. More importantly to me though, are the coveted ones that Elmer T. Lee and Blantons tend to come from, which makes me curious if Stagg Jr. barrels have a special place in the grand system that is the Buffalo Trace Distillery. 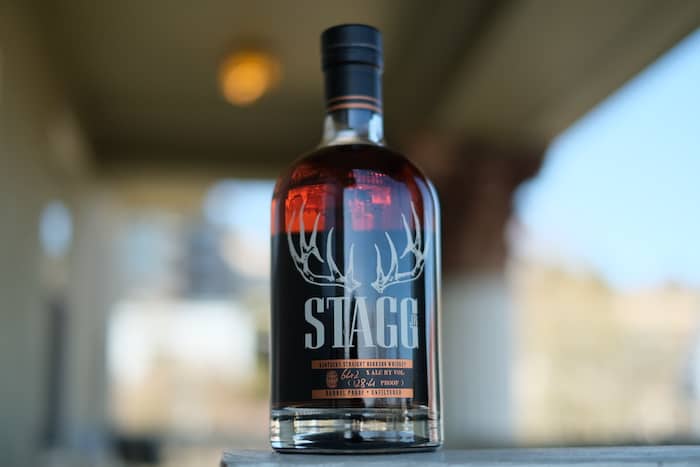 Nose: Preserved dates, banana pancakes and molasses, raisins, plenty of wood like the strained remnants after a barrel is poured off. Burnt tomato, lemon cakes, and crème brulee.

Palate: Chocolate covered cherries, buttered pecans, smoked meat. Touch of banana and burnt corn. That’s all with a bit of water in it. Without water, you get a pleasant sweetness followed by a full blast of that 64.2% ABV. It then becomes a bit lactic, and lingers on a higher note than the nose would allude to.

It never really seems to go away, but eventually mellows and you find more ‘typical’ bourbon flavors, but also sweet sherry, buttered corn and perhaps a bit of honey covered yogurt.

Stagg Jr. definitely has it’s own character. The low rye mashbill #1 and incredibly high proof make it a lot of fun for bourbon fanatics because it mixes sweet corn with high octane intensity. You get plenty of barrel, plenty of flavor, and plenty of punch. To be honest, it isn't really my style. I appreciate it greatly and recognize the quality, but it doesn't hit the right notes for my palate. Having said all that, add an ice cube and jump into a journey of flavor development as the dilution takes hold, that’s my recommendation.