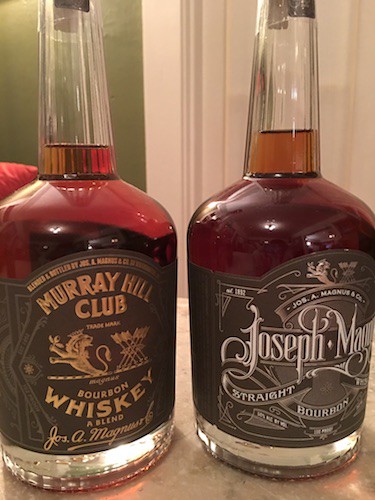 When I was about 26 and living in Hoboken with my husband, one of our favorite things to do on a Sunday afternoon was go across the street to our favorite pub and day-drink while watching World’s Strongest Man on ESPN2. These guys were heroes, towing cars via ropes in their teeth, or picking up giant concrete slabs and tossing them like waddled up receipts into a trash can. Inevitably, the contestants were always named something like “Magnus von Magnus,” which in turn became our conversational shorthand for when something was truly badass.

I thought of those drunken afternoons when I read about Joseph Magnus, which was only recently reestablished in 2015. According to the Washington City Paper, in 2007, Jimmy Turner found a bottle of bourbon in the closet while cleaning out his parents’ home after his mother died. The bottle was in fact a 100+ year-old bourbon passed down through generations. This discovery got Turner to learn more about his great-grandfather, Joseph A. Magnus. Magnus made bourbon, rye, whiskey, gin, and rum. This then led to more investigation, both in terms of family tree research and whiskey leads, to source some similar in flavor profile to this heirloom liquid treasure.

A year-and-a half ago, Jos. A. Magnus & Co., a bourbon and gin distillery, opened in Washington, D.C. The distillery currently offers two whiskies: Joseph Magnus Straight Bourbon and Murray Hill Club Bourbon, both of which are drawn from sourced whiskeys. As with Scotch, sometimes the bottle also tells part of the story. In this case, the distillery has said the design of the custom containers is “inspired by historic Magnus bourbon bottles.”

And I’ll tell you that in person, they really are quite cool. Very deco.

We were lucky enough to get a bottle of each to sample and compare. Would these be as fierce as those long-ago Strongman Sundays? I got to find out.

Vitals: The base of this whiskey supposed to resemble the old bottle found by Turner in the closet. From there, a triple-cask finished spirit was created via “a marriage of bourbon aged in white oak and finished in Oloroso Sherry, Pedro Ximenez Sherry, and Cognac casks.” It’s 100 proof and costs about $80.

Palate: The orange on the nose comes through on the palate, bright yet smooth. I definitely taste the cognac finish. Normally I’m not a fan of cognac—I find it a little harsh—but this isn’t at all discordant. A non-smoky caramel char emerges, then finishes warm and toasty. Definitely warming like a higher-proof whiskey should be, but it tastes like lower proof. A compliment.

I like everything about this whiskey. Truly. All of it. More, please! Out of the gate, the 2017 bar has been set very high.

Vitals: This came out in July 2016, and is a blended bourbon made from whiskeys ranging in age from nine to 18 years, as we reported. More specifically, 11-year-old bourbon makes up the majority of the blend, followed with an 18-year-old bourbon and a nine-year-old light whiskey. It’s 102 proof and a bottle costs about $80.

Palate: The nose is sweet, but on the palate this has a savory, tingly, spicy quality. Although it’s a bourbon, it reminds me more of a rye. Black pepper. Vanilla. This is more alcohol-forward than the Magnus. Longer flavor profile, tip of my tongue and lips burn a touch.

After the Magnus, honestly, anything is going to pale. Sorry, Murray Hill! Also, the thing is, this isn’t that different from so many of the other whiskeys I’ve tried. I’m looking for a differentiator…and not finding much. It might open up with a little ice or time in the glass, but honestly, I find it like the whiskey equivalent of the following conversation:

19
Shares
11.8k
Views
Share on FacebookShare on TwitterGet Our Newsletter
Read More Whiskey News
Whiskey Review: Shenk’s Homestead Kentucky Sour Mash Whiskey (2020)
Cheers to the Dads! Personalize a bottle of his favorite whiskey to create a modern gift for the modern man. Use code: FATHERSDAY20 for $20 off your next order of $100 or more at ReserveBar